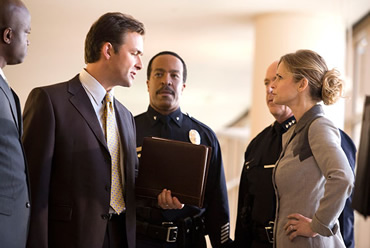 TNT has announced that The Closer is returning on Monday, July 11th, with 10 new episodes. Will that be the end of cable’s most popular TV series? Not quite.

Last July, TNT announced that The Closer had been renewed for a seventh season of 15 episodes. In December, they revealed that season seven was now considered the final season and there wouldn’t be an eighth. Series star Kyra Sedgwick apparently felt it was time to call it quits. She said, “I want to thank TNT and Warner Bros. Television, as well as the incredible fans of The Closer, for all of their unwavering support over the last seven years.”

In January, TNT began rethinking their wanting to end their most popular series. It was later decided to add six more episodes to the order. So, 10 will air this summer, another five will air over the winter, and then the final six installments will run during the summer of 2012.

The final six episodes will serve as a goodbye to Sedgwick’s Brenda Leigh Johnson. They’ll also set up a potential spin-off series that would probably include the rest of The Closer characters and a new lead. At last report, the new show will be called Major Crimes and focus on the behind-the-scenes deal-making that keeps dangerous criminals off death row.

What do you think? Are you glad to hear that The Closer will be around for awhile longer or would you prefer that TNT air all 21 episodes in one grouping?

I feel you should aired all the seventh season shows at one time I have purchased all the years DVD of complete seasons and watch them again and again I cannot believe such a wonderful show was permitted at whatever cost to Kyra Sedgewick should have been she won awards and all unbelievable.
I do not like major crime due to the crude woman that is on that show so I do not watch it I watced it once and once was enough Kyra had the right mannerism and made Closer enjoyable.
Thank you

Most TV detective shows are pretty similar, but not The Closer. The cast is exceptional starting with Ms Sedgewick. The writing is original and humorous. My wife and I enjoy this show so much that The rumor of its ultimate ending has saddened us tremendously.
If Kyra really feels like she has had enough, we understand, but we would welcome that eigth seasson if she changes her mind…perhaps the network could sweeten the pot financially.