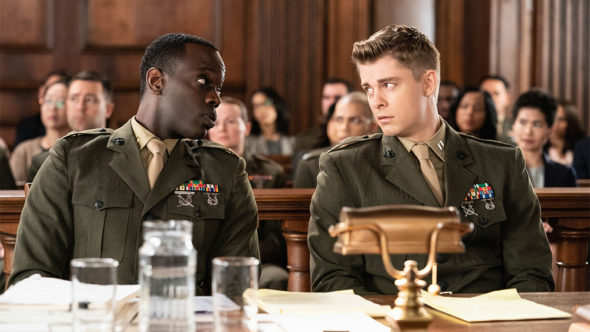 It’s case closed for The Code TV show. CBS has cancelled the low-rated drama series so there won’t be a second season. Actress Dana Delaney broke the news via Twitter (see below).

The Code got off to a mediocre start in the ratings when it premiered on April 9th. The show drew a 0.73 rating in the 18-49 demographic with 8.13 million viewers. The following week, in its regular timeslot, it fell to a 0.53 rating with 4.45 million. The numbers for the rest of the season didn’t get much better.

In June, CBS pulled the series from the schedule and replaced it with reruns of renewed dramas Magnum PI and God Friended Me. The Code returned from its month-long hiatus this month and the poor ratings got even worse for the four remaining installments.

The first season finale aired last night and, despite having some devoted fans, that will also be the end of the show.

Sad to see this one go, but I get to keep ALLL the memories!!! https://t.co/0MXH1UHxUF

It was a honor to tell these stories. It was an even bigger honor to work along side these wonderful actors and lovely humans. Friends for life. Thank you for watching. ❤️ https://t.co/8SC6C9jZhI

Thank you to our @TheCodeCBS fans! Our show won't return next season, but I'm so grateful for the experience, my amazing cast, crew and creatives, and all of you who tuned in! And a THANK YOU to the #USMC, it's been an honor to play Lt. Harper Lee❤️

What do you think? Did you enjoy The Code TV show on CBS? Would you have watched a second season of this drama series?

This show is more entertaining and realistic than any dating or celebrity show. Quit ending the entertaining and educational shows and get rid of the stupid dating and celebrity shows that are dumbing our population down.you want people to sit in front of there television then give them something worthwhile to watch. God bless America and thank you to all of our service members for your service and sacrifice.

The Code was a great and entertaining show. Very sorry to see it end. Come on CBS, bring it back.

Really liked The Code! It was a little confusing at first getting to know all the characters. It needs a chance to pick up a following in a good timeslot. I feel there are too many reality shows that I don’t bother watching. My husband and I enjoy shows that make you think and don’t have a lot of blood and gore.

I agree with Cindy it seems that CBS cancels really good shows and keeps the “Reality” shows going when there’s no point. The Code was a good show and I can probably list 5 or 6 more good shows cancelled by CBS that were very good.

After slow, predicable start, it really picked up and will be sorry to see it end so soon.

Why are the good shows cancelled? I am so sick of stupid hook up shows being the ones that are renewed. Why are there so many hook up shows taking over our channels? Take those off the air and let us keep the shows with character.

Bad mistake CBS canceling another show worthy of air time. It was a great show with fantastic actors. CBS is making a name for themselves by canceling all the great shows and keeping shows involving sex, murder and so-called reality shows. Love Island five nights a week is a show with desperate people. I would hate to think the only way I could get a man is by going on national TV and flaunting everything. All you see today is sex, murder and filth. CBS is out for me. Hopefully, NBC will be smart enough to pickup the great shows… Read more »

Loved the show, acting, and story lines. Thank you to all who put it together. I hope another group picks it up like Jag.

So very upset cbs is not renewing the code! What a great show! One of our favorites! Almost ready to ban watching cbs they do this to all the good shows!

I am so upset that TheCode has been canceled it is one of our favorite shows! Very sad! Can’t believe they are replacing it with reruns of magnum pi and some other stupid show! I’m almost ready to ban cbs for good!

I’m very disappointed to learn that The Code has been cancelled. I enjoyed it a lot and will miss watching it next season!

I really enjoyed the show. I hated to see it canceled.

That is too bad because it was an excellent show.

I watched the show about 5 times and I liked it. The acting was very good. The one problem I had was the delivery of lines was sooo fast, if you looked away for a second you got lost. Luckily I recorded it so I could jump back. Then about the 5th or 6th show it turned really sappy, or I should say the writing. I quit watching after that. What kept me watching for as long as I did was the cast who were amazing to watch and that could have only happened with an amazing behind the scenes… Read more »

Shame on you CBS!!! Another great show bites the dust. Thank you cast and crew for a superb show. Will miss you all!