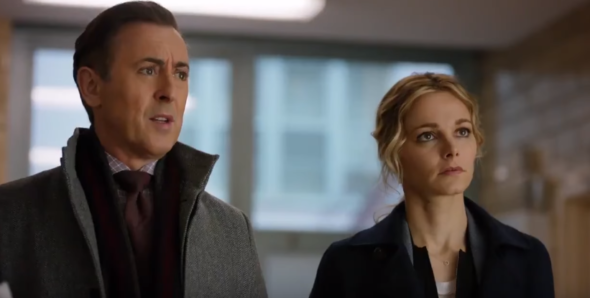 It will soon be “case closed” permanently for the Instinct TV show on CBS. The network has cancelled the Sunday night series so there won’t be a third season for Reinart and Needham.

Airing on Sunday nights, the second season of Instinct is currently averaging a 0.31 rating in the 18-49 demographic and 3.39 million viewers. Compared to season one, that’s down by 50% and 49%, respectively. Instinct is nearly the lowest-rated TV shows of the summer CBS TV shows.

A pair of Instinct episodes will air tomorrow night on CBS and the series finale will run next Sunday, August 25th.

WELL THIS SUCKS BALLS. But when one door closes another… actually fuck that. This sucks balls. Love to all our fans and the most incredible cast and crew. Thank you all for an incredible two years. @Michael_Rauch @Alancumming @CBSTweet @CBSTVStudios @TVdub https://t.co/80QDAJvbTy

What do you think? Did you enjoy the Instinct TV show on CBS? Would you have watched a third season of this series?

It really does suck they cancelled Instinct, loved the show and was looking forward to a 3rd season!! Very very disappointed, but as usual they seem to cancel most of the good shows!

I can’t believe they canceled it! I pfind a show we all like and cbs cancels it! It had everything in it and it wasn’t gory, fowl or full of sex. The writing were thought out and written intelligently and the characters were great! And we loved the actors. Alan Cummings was great! They all were. Can’t we do something to bring it back? A petition? It worked for Last Man Standing and Lucifer! We use to wait for it each week. Let’s bring it back!!!

Instinct was one of the best shows on TV. So I’m really disappointed that CBS would cancel it. Maybe it was just too intelligent, or not gory, foul-mouthed, or sexual enough for the network. It would be great if enough fans could demand its resurrection to cause it to happen.

Ok, what is CBS thinking? I am 71 years old and my wife is 72 and we both love this show. This show has it all. Good writers, great cast and the list goes on. But what it does not have is bad language, sex and all the crap other shows have that is supposed to make them a success. One of our daughters just walked in and said, “did you know that Instinct was cancelled?” She and her husband love this show too! What do we have to do to get it back on the air for season three?

I really want a third season of Instinct. I enjoyed watching this show and would like to see a proper ending to the show.

This is crazy… it was a great show. Great cast, plot, funny, involving and I, my family and friends looked so forward to it each week… now what do we do?? will never know what happens.. baby..no baby?? what happens to Liz and Jules?? and all the other plots??? Of all the mystery shows this had to be one of my absolute favs…. maybe another network can pick them up….. PLEASE!!!!!!!!!!!!!!

Loved this show. Am watching on CBS all access again. Still like them. Please no more REALITY shows that are not really reality. Hate hate hate them. All the good shows do not last and I do not understand. Maybe another night would have made a difference. Wish another network would pick it up.

Big mistake. This was/is an intelligent and interesting TV show. Once again,CBS dumbs down their shows for inept husbands, wives, sensational news entertainment, and ridiculous comedies about race relations, etc.
Thankfully, there are alternatives to the mainstream
mindset.