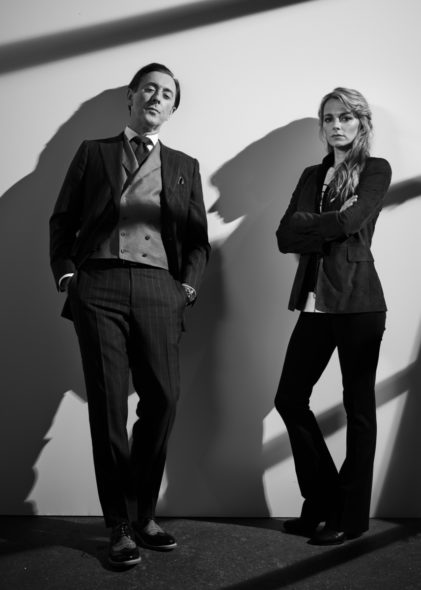 Reinhart is teaching psychopathic behavior when NYPD Detective Lizzie Needham (Novakovic) seeks his help in catching a serial killer. It seems the murderer is using the professor’s first book as his training manual.

Although Dylan has grown accustomed to his student’s enthusiasm and adoration, Detective Needham isn’t one to take “No,” for an answer. He agrees to leave his comfortable retirement behind, in order to work this compelling case.

Dylan’s old CIA colleague, Julian Cousins (Andrews), is every bit as bright as the professor and excels at getting the goods on anyone he targets. Meanwhile, Lt. Jasmine Gooden (Leal) is happy to see her sharpest detective accept help on any case. Lizzie has refused to partner with anyone, since a tragedy occurred, a year ago.

Although working the case gives Dylan a new sense of purpose and vitality, his husband, Andy (Ings), worries his spouse has forsaken their agreement to permanently leave his past in the past. While things are bumpy between Dylan and Lizzie at the outset, they soon learn that together, they make one heck of a team.

Series Finale:
Episode #24 — Grey Matter
A gruesome discovery in a city pond leads Dylan and Lizzie to investigate a young man’s murder, while Andy rescues one of Dylan’s students from a legal bind.
First aired: August 25, 2019.

What do you think? Do you like the Instinct TV series? Should this CBS TV show have been cancelled or renewed for a third season?

Should NOT have been canceled! Found this show on Paramount. I love this show. Sad only 2 seasons on CBS. I was really into the characters. If CBS doesn’t want quality shows maybe Paramount can pick up this great show!

This was a great show. Should NOT have been cancelled. I have been waiting for its return, had no idea it was cancelled. Bring it back!!!!!!!!!!

instinct was a great show and it should have stayed on to build a bigger audience. It was wonderful.

Please bring this show back!!!! It was great!!!

renew this is great

This was such a great show!! Mystery, drama and humor all crafted into a new classic!!
Please bring it back