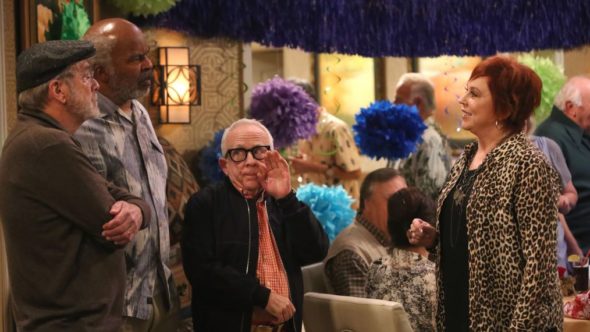 We love “The Cool Kids”! SO funny! Well written and great actors. I don’t look forward to watching much on network TV, but I look forward to this jewel every Friday night. Please keep it going!

Don’t uncool THE COOL KIDS. It is our prime-time Friday night entertainment!

The Cool Kids is one of the best shows on any Network. They are hilarious. There’s nothing they won’t do to have fun. It’s a show I can relate to being a lady of a certain age lol. In short, I absolutely love this show and the cast is just amazing. They compliment each other so well. Please FOX reup this show for a bunch of seasons to come. It is absolutely watch-worthy!!

I love the cool kids. What a great ensemble of actors.please renew for a second season.

Please renew The Cool Kids! I look forward to watching it each week more than any other show I watch.

Please renew this show it is the best comedy on tv since I love Lucy, the story line is hilarious and so perfect for seniors and what is to come.

Cool Kids is soooo funny! It doesn’t need the laughtrack, though. All 4 actors have great chemistry. Please renew for season 2 so we can stay at Shady Meadows!!!!

I really love the TV show Cool Kids! The cast are Super hilarious and I love the guest appearances as well. Super excited for season 2! Two thumbs up for this show, it’s been a while since I’ve seen a TV show this comical! 🙂

I truly love the Cook Kids TV show! It really is Super hilarious, I can’t wait for season 2! Love the cast and guest appearances as well! two thumbs up for this show! 🙂

the cool kids are a funny entertaining television show. Excellent cast of characters. This is a family show and this is one of the 2 television shows that the entire family gets together ( middle schooler, high schooler and college student ) and enjoy. I think people have OD’d on all the reality tv shows, game shows police shows and all of the singing shows.

I love this show. It’s hysterical. I particularly get a kick out of Leslie Jordan. He is soooo funny. Please bring it back for season 2 so I can have some more great laughs.