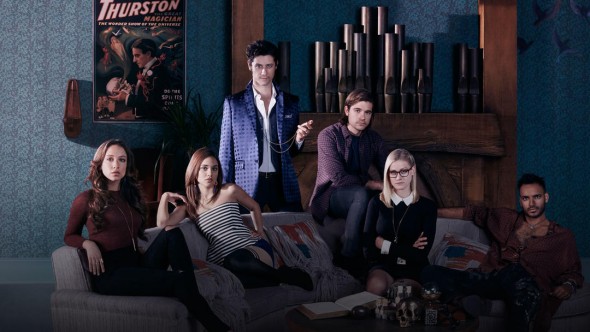 An outsider, grad student Quentin Coldwater (Jason Ralph), chooses to spend more time immersed in the Fillory and Further fantasy book series — a favorite since childhood — than living his life.

When he and his best friend and crush, Julia Wicker (Stella Maeve), are transported to Brakebills for an entrance exam, their world changes, forever. Based on the use of the powers Quentin never knew he possessed, he is accepted into Brakebills.

After the bright and beautiful perfectionist, Julia, fails her entrance exam, she grows fixated on gaining access to this world, which she should have forgotten, entirely. It is at Brakebills that Quentin and his friends will discover the world of Fillory and Further is far from fictional, and far too dangerous.

Shy and talented Alice Quinn (Olivia Taylor Dudley) is from a line of powerful magic practitioners. Her confidence grows when she wields her powers, and she resolves not to let her dark past cast a shadow on a bright future.

Loner William “Penny” Adiyodi (Arjun Gupta) is gifted, talented, and easily irked. Who knows the true limits of his abilities?

Opinionated and convinced of his own brilliance, Eliot Waugh (Hale Appleman) looks like he has come by everything easily, but appearances can be deceiving. As far as Eliot is concerned, magic comes from pain.

The tact fairy did not attend the Christening of the blunt Margo Hanson (Summer Bishil). Although skilled at her art, Margo is as dedicated to partying as she is to magic. What secrets is she hiding?

What do you think? Do you like The Magicians TV show? Do you think it should be cancelled or renewed for another season?

please don’t cancel the show its awesome i love the show it would be great if there was a second season and more to come after it.

I just couldn’t get past the language. Syfy has over-stepped the boundaries.

Which language use couldn’t you get passed?

I love this show. Every Monday i’m glued to the tv. I wish it stayed on longer than a hour. Please keep this show on and hurry back with season 2

To those who do not know: the show was renewed back in February for a second season that is due to air in 2017

Please renew this show. It’s like Hogwarts for grownups!!! I await every episode and although the young college-aged Magic workers ARE young they don’t ACT that way (I. E. Shadowhunters that gives the impression they are all going to kill a few demons on the way to mall.

This is one of my favorite shows. Funny, sexy, and suspenseful. Love it!

No way do not cancel this show!

This is a great show with a hot cast.

Surprisingly good, enjoyable series. The first episode caught my attention, and each episode since has kept me wanting to see the next one, not because of some cliffhanger technique, but because it’s truly different, and fun. It’s a fantasy book on TV.

If this show get cancellled then people are blind, like it has lots of potential, SciFi for the people there this is your other Defiance, don’t pull the dick move on this one

Yes renew renew its a very likeable show. Its different on the edge of your seat show. Dont dump it before it has a chance yo get it syarted

I love the show- I just hope they get on to the plot soon with more magical action between good and evil than them learning step by step magic.

Honey that’s how REAL Magick works. You learn it step by step. If they tried to get in some kind d of big fight scene without learning the basics they would get CREAMED. this is NOT Harry Potter (or Fillory lol)

Sorry not putting you down AT ALL.

The show is pretty good, my only pet peeve is that until now they’ve only been teasing the major plot. It’s like Harry Potter, if Harry Potter started magic school in his twenties and there was an ample amount of death, cursing, ******** and drinking with much heftier penalties for ******** up spells like indirectly killing and or blinding your professors.