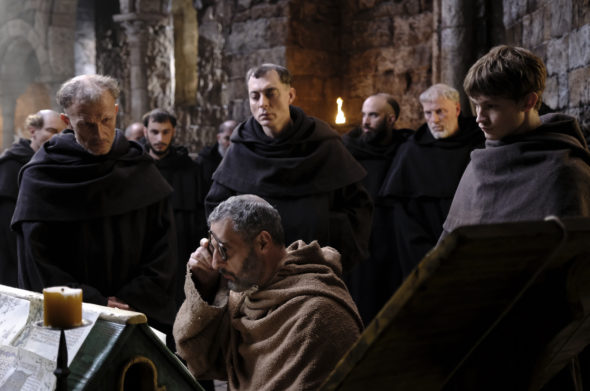 TV show description:
From creator Giacomo Battiato, The Name of the Rose TV show is a medieval detective drama, based on the 1980 Umberto Eco novel of the same name, which also inspired the 1986 film, starring Sean Connery and Christian Slater.

The series, which first debuted in Italy on March 4, 2019, unfolds in northern Italy in 1327. The story centers on brilliant English Franciscan friar William of Baskerville (Turturro) and Adso of Melk (Hardung), a young novice.

As the son of a German general, Adso’s family expects him to cultivate a military career, but the young soldier feels called to be a monk. When he meets up with William, he impresses the friar, who agrees to take on Adso as his novice.

While the papacy battles the Holy Roman Empire, Adso and William make their way to a remote abbey for a summit on whether the church needs to remain poor to imitate the life of Christ, or whether it should acquire wealth and power in order to preside over the western world.

They arrive at the monastery soon after the monks discover the corpse of one of their own. William’s investigation leads him to name suicide as the cause of death, but then another dead monk is discovered and the circumstances are suspicious.

The abbey itself is a mystery. In addition to housing the biggest library in Christendom, it is a maze of traps, ambushes, and secret passageways. When William and Adso pass the library’s forbidden gates to enter the labyrinth, they risk insanity and death. All the while, a serial killer is on the loose.

What do you think? Do you like The Name of the Rose TV series? Should this SundanceTV show be cancelled or renewed for another season?