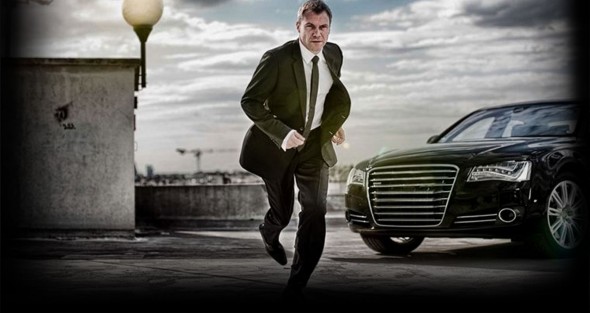 TNT has picked up seasons one and two of Transporter The Series, a new TV series based on the Transporter feature film series. The show was originally slated to air on Cinemax but that cable channel dropped it.

Transporter The Series Coming to TNT in Fall 2014

TNT has picked up Transporter The Series, making the network the U.S. television home for the exhilarating, adrenaline-charged series based on the smash-hit movie franchise. TNT will air the first and second seasons of the series, which will make its U.S. television debut on the network in fall 2014. Season two, which is slated to premiere worldwide in late 2014, will go into production Feb. 26, with shooting planned for Morocco, the Czech Republic and Canada.

Transporter The Series centers on Frank Martin (Vance), a professional “transporter” paid to pick up and deliver people or cargo from anywhere in the world. Frank is the very best at what he does and handles only the most difficult dangerous and assignments. Transporter The Series features dry wit, exotic locations, heart-pounding action and nail-biting suspense.

“Transporter The Series is a roller-coaster ride with big-screen action, fantastic locations and an extremely charismatic lead in Chris Vance,” said Michael Wright, president, head of programming for TNT, TBS and Turner Classic Movies (TCM). “The Transporter franchise is a proven winner embraced by movie and television viewers around the globe, and we’re proud that TNT will become the television home for fans in the United States. Transporter The Series is a perfect addition to TNT’s lineup, as we continue to expand our reach with such action-packed dramas as our upcoming Legends and The Last Ship.”

Transporter The Series is produced by Atlantique Productions, with executive producer Olivier Bibas (Borgia, Jo), and QVF Inc., with producer Susan Murdoch (Doomstown, Dan for Mayor). The series is commissioned in France by M6 and in Canada by The Movie Network and Movie Central. Award-winning writer and producer Frank Spotnitz (X-Files, Hunted, Strikeback) has come on board as the new showrunner and executive producer of the 12-episode second season. Also serving as executive producers are Chris Vance and award-winning producer Fred Fuchs (The Godfather: Part III, Bram Stoker’s Dracula).

About Atlantique Productions
Atlantique Productions is a production company dedicated to high-end drama programs for the global market and is headed by Olivier Bibas. Over the years, Atlantique fostered a strong network of creative and financial partners in Europe, as well as in North America, allowing it to bring together the best talents from both sides of the pond. All of Atlantique’s productions are shot in English and sold around the world, including Borgia (38 x 52 min – Canal+, 3 seasons, licensed in over 70 countries, including the US/Netflix, Germany/ZDF); Transporter The Series (12 x 52 min – licensed in over 130 countries, including France/M6, Germany/RTL, Canada/HBO Canada); Jo (8 x 45 min – TF1, Sat1, Fox International); and Death in Paradise (8 x 60 min – France Télévisions, BBC).

About QVF Inc.
QVF Inc. is a boutique entertainment company with a legacy of excellence in the production of long form and series television. Headed by Susan Murdoch, QVF has been a trusted production partner and originator of award-winning, high quality television product. More information about QVF can be found on the company’s website at http://www.qvfinc.com.

About TNT
TNT is television’s destination for drama. Seen in 101 million households and ranking among cable’s top networks, TNT is home to such original drama series as Rizzoli & Isles, Major Crimes, Falling Skies, Perception, Dallas, Franklin & Bash and Mob City. TNT’s upcoming slate of scripted dramas includes the original series Legends, The Last Ship and Murder in the First, as well as Transporter The Series, which will make its U.S. television debut on the network this fall. TNT also features dramatic unscripted originals like Cold Justice, Boston’s Finest, Marshal Law: Texas,APB with Troy Dunn and the upcoming Private Lives of Nashville Wives, Save Our Business, Inside Job, On the Menu (working title), Wake Up Call (working title) and Life Flight. In addition, TNT is the cable home to popular dramas like Hawaii Five-0, Castle, The Mentalist, Bones and Supernatural; primetime specials, such as the Screen Actors Guild Awards®; blockbuster movies; and championship sports coverage, including NASCAR, the NBA and the NCAA Division I Men’s Basketball Championship.

What do you think? Does this sound like a good idea for a series?

This is such a good show I was a little disappointed with Season 2 it’s different and a little darker but I would love a Season 3 there’s still so much more they can do with it and I looooooooooooove Chris Vance as Frank Martin he’s awesome! I would love for this show to make it to season 5 or 6.

Bring back Transporter, The series for a couple of more seasons…Frank – Carla and the Mechanic were the best………….

Loved every episode. Truly hope to see another season!
Both my wife and I looked forward to the next episode!

One of the best series on TV. I watched the first 2 seasons and hope to see a third season.

Why are we confusing the issue? I’ve seen several of these “updates” now, all seeming to infer that we’ll see something new. TNT will be running a show that’s new for them, maybe, but reruns for those of us who were ardent watchers.
Unless there’s a season 3 (unlikely, since it looked like Frank was about to plow into his nemisis’ car each going 60mph), forget it!!!

That’s the problem, there was a black screen and only sound of car crush. Nothing else. We can’t know what actually happened with Frank. And there is still hope.

I’m all for hope. I’d just prefer the posts about earlier seasons to stop. If they come up with a Season 3, THAT I want to see!!! However, if that was ever intended, I’d have thought that it’s likely that they would already put out teasers about it. Lots of scenarios that could make it happen. If Frank’s high-tech car had a capability of bouncing the front end (like a low-rider, if you know what that is), he could have gone completely over the other car. Or, maybe his car and air bags were good enough that he survived such… Read more »

Great show hope it is picked up for many more seasons

Why are you posting old news. Try posting something new about the show. OK. Thank you.

http://www.thepetitionsite.com/291/012/449/renew-transporter-the-series-for-season-3/ – let us try to save “Transporter: the series” together. Here is a petition!

I love this series as well; it is a great binge-watch. And it’s great for guys and gals of all ages; and couples, too. I sent emails to different addresses I found here, but my email was returned and the people at TNT in the Netherlands said I had the wrong company. They even gave me the address tnt@turner.com but that email was returned to me as well; something to do with the server. I’m not giving up though. Transporter: the series is definitely worth saving. I want more!!! I am sending another letter via snail mail to the TNT… Read more »

Please, renew Transporter: the series for 3th season. The show is incredible, I could watch it every day also, if there was such possibility. My opinion is, that the second season became more profound, serious, there was more action. Well, with the last episode it reached the extreme. If this is the end, it is awful. The main character, Frank Martin has overcame so much enemies, survived so much critical moments, he must ultimately survive this – for the sake of his family. I really hope(and you will have so much grateful fans) you will not pass this.