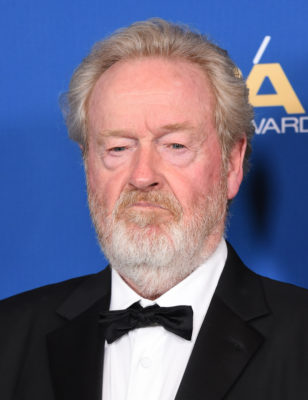 Ridley Scott is teaming up with TNT. Recently, the network announced they’ve ordered a new TV show from the filmmaker called Raised by Wolves.

TNT has not yet announced a debut date for Raised by Wolves.

LOS ANGELES, OCTOBER 8, 2018 – Turner’s TNT has greenlit straight to series Raised By Wolves, a serialized sci-fi series from master storyteller and filmmaker Ridley Scott (The Martian, Blade Runner, Alien: Covenant), who will also mark his television directorial debut with the series. Acclaimed writer Aaron Guzikowski, the visionary behind the highly lauded film Prisoners, will serve as showrunner as well as a writer. The series is being produced by Scott’s Scott Free Productions in association with Turner’s Studio T and Madhouse Entertainment, with Scott, Guzikowski, David W. Zucker (The Man in the High Castle) and Jordan Sheehan (The Terror), and Madhouse Entertainment’s Adam Kolbrenner (Prisoners) and Robyn Meisinger (Prisoners) serving as executive producers. The International rights to the series will be distributed through Turner International.

Raised by Wolves centers upon two androids tasked with raising human children on a mysterious virgin planet. As the burgeoning colony of humans threatens to be torn apart by religious differences the androids learn that controlling the beliefs of humans is a treacherous and difficult task.

“I’m always searching for new frontiers in the sci-fi genre and have found a true original in Raised by Wolves—a wholly distinct and imaginative world, full of characters struggling with existential questions: What makes us human? What constitutes a family?  And what if we could start over again and erase the mess we’ve made of our planet?  Would we survive? Would we do better?” said Ridley Scott. “Given TNT’s impressive run of bold, quality programming, this feels like exactly the right home for this kind of ambitious television.”

“Ridley Scott is simply the best there is in the sci-fi genre,” said Sarah Aubrey, executive vice president of original programming for TNT. “Besides directing some of the most important sci-fi films of all-time, Ridley has created iconic characters from Alien’s Ripley to Prometheus’ Elizabeth Shaw. We’re thrilled to have Ridley do the same for us as we look forward to his vision of Aaron’s complex and futuristic Mother. It’s incredibly rare to be able to make television that both challenges one’s intellect and also thrills the excited fangirl side—Raised by Wolves is that rare show that does both.”

“Ridley Scott’s movies have always been a part of my life and a huge inspiration in my work,” said Aaron Guzikowski.“So getting the opportunity to work with him and TNT on a story that is so near and dear to my heart is truly a dream come true.”

The project marks Scott’s return to the network. He served as executive producer on TNT’s award-winning CIA mini-series The Company in 2007. Scott joins acclaimed film director and executive producer Patty Jenkins (Wonder Woman), who is producing the upcoming suspense limited series, I Am the Night, this January, as well as futuristic sci-fi thriller Snowpiercer (showrunner Graeme Manson) and the morally-complex drama Tell Me Your Secrets (Bruna Papandrea, Harriet Warner), which are scheduled for summer 2019.”

What do you think? Are you a fan of Ridley Scott’s work? Will you watch Raised by Wolves?

No Major Crimes-No TNT and given the network’s 56% drop in viewership since Kevin Reilly took the helm including a massive drop since MC’s cancellation, it looks like I’m not alone . Sad since Scott ROCKED The Terror. Let’s see if ole Kev even keeps his job before any viewer gets too excited about this. Stephenson announcing he is pulling TNT/TBS monies for HBO, Kev may not be able to afford it.