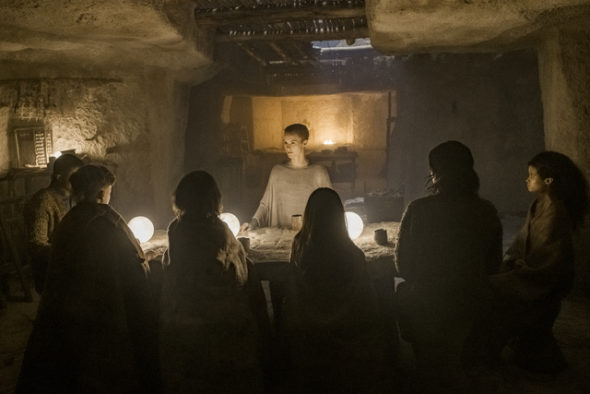 Is parenting any easier for androids? Has the Raised by Wolves TV show been cancelled or renewed for a second season on HBO Max? The television vulture is watching all the latest cancellation and renewal news, so this page is the place to track the status of Raised by Wolves, season two. Bookmark it, or subscribe for the latest updates. Remember, the television vulture is watching your shows. Are you?

Streaming on the HBO Max subscription service, Raised by Wolves was created by Aaron Guzikowski. Ridley Scott serves as an executive producer and directed the first two episodes. The show stars Amanda Collin, Abubakar Salim, Winta McGrath, Niamh Algar, Jordan Loughran, Matias Varela, Felix Jamieson, Ethan Hazzard, Aasiya Shah, Ivy Wong, and Travis Fimmel. The TV series revolves around two androids, Mother (Collin) and Father (Salim), who are assigned to raise human children on a mysterious virgin planet called Kepler-22b, after the Earth has been destroyed in a great war. As the burgeoning colony of humans threatens to be torn apart by religious differences, the androids learn that controlling the beliefs of humans is a treacherous and difficult task.

Unless they decide to publicize viewership, it is difficult to predict whether HBO Max will cancel or renew Raised by Wolves for season two. Since HBO Max isn’t ad-supported, it can take a chance on series it believes in, but sooner or later it comes down to production costs, versus viewership numbers. Given that noted filmmaker Ridley Scott is attached to the project and the show has high production values, I think it will be renewed because it could potentially attract new subscribers. I’ll keep my ears open and an eye out for news, and will update this page with breaking developments. Subscribe for free alerts on Raised by Wolves cancellation or renewal news.

9/18/20 update: Raised by Wolves has been renewed for season two by HBO Max.

What do you think? Are you glad the Raised by Wolves TV show has been renewed for a second season? How would you feel if HBO Max had cancelled this TV series, instead?

I enjoyed the show very much and am glad to hear there will be a second season.

Just wanted to say thanks for not typing a 6 page paper to tell us you don’t know. i hate how they tease in the title the answer only to read for an hour to find out you learned nothing new about your initial question. the ironic thing is if they just answered right away we would be inclined to keep reading in a happy mood instead of a pissed off mood asking where is the answer!!!! we don’t want to read your stupid thoughts just want to get the answer that the title teases! man nothing makes more angry… Read more »