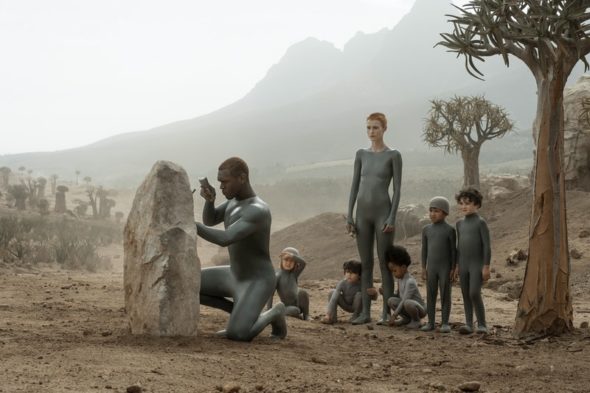 What’s next for Raised by Wolves? Creator Aaron Guzikowski recently spoke with Deadline about season two of the HBO Max TV show.

HBO Max has already renewed Raised by Wolves for a second season, so what can fans expect? Creator Aaron Guzikowski says filming is expected to begin in early 2021 in South Africa:

And what about the season one finale? How will the serpent play into season two? Guzikowski says:

In the final episode, Mother even says, it wasn’t our creator; something else put this inside of me. We don’t know what that is, but what we do know is when they first arrived on this planet, they had found all these giant serpent skeletons. So, at one point, this thing that she’s given birth to did exist on this planet. They were like the dinosaurs of this planet, and somewhere, what it was, it seems that it has somehow manipulated her into bringing these things back. So, in season two, there’s a big new piece on the board that’s Mother’s seventh child, which she’s going to have to deal with.”

Also, Guzikowski said fans don’t have to worry about Sue. She’ll be okay:

No, actually, I can breathe some hope there. I would say that Sue has a very good chance of surviving into season two.”

What do you think? Have you seen Raised by Wolves? Will you watch season two?

Who would film in S.A. now? Please choose a different and saver location for your Crew! All the best and lets see your S2.

I was hooked from episode 1.
Mother and father are great scifi characters and the eerie music throughout the episodes really sets the tone.
The supporting actors are very good too.

Creater from Alien never watched whole thing either something producer Ridley Scott amazing love this series hooked on it. HBO Maxx creative story can’t wait for next season got renewed for season 2 it worth watching my opinion.

This interview has been VERY helpful. The finale left me very confused and I actually unsubscribed because I had the impression that the series had been killed!

It’s fine to have a confusing story, but HBO MAX did a nothing to remove mistaken impressions about what was going on with the series!

It took until the 2nd episode to warm to this excellent production but when I did I was hooked. Excellent work by Amanda and Travis in this well nuanced sci-fi/psycological thriller.
Will definitely look forward to the next series.