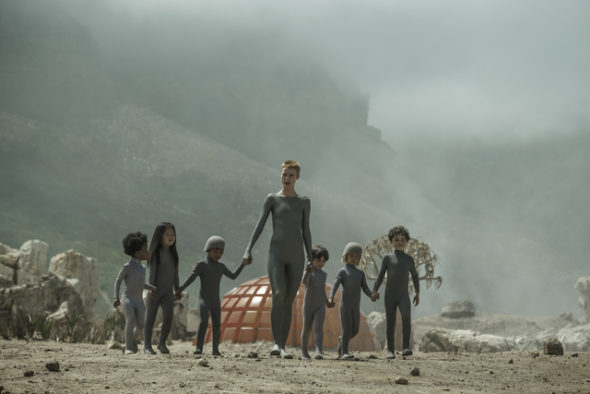 The trials of the residents of Kepler-22b will continue on HBO Max. The streaming service has renewed the Raised by Wolves TV series for a second season.

A science-fiction drama series, Raised by Wolves was created by Aaron Guzikowski. Ridley Scott serves as an executive producer and directed the first two episodes. The show stars Amanda Collin, Abubakar Salim, Winta McGrath, Niamh Algar, Jordan Loughran, Matias Varela, Felix Jamieson, Ethan Hazzard, Aasiya Shah, Ivy Wong, and Travis Fimmel. The TV series revolves around two androids, Mother (Collin) and Father (Salim), who are assigned to raise human children on a mysterious virgin planet called Kepler-22b, after the Earth has been destroyed in a great war. As the burgeoning colony of humans threatens to be torn apart by religious differences, the androids learn that controlling the beliefs of humans is a treacherous and difficult task.

Here’s the HBO Max announcement about the second season renewal:

LOS ANGELES – September 17, 2020 – After a striking debut on the streamer as the #1 performing Max original since the platform’s launch, HBO Max has ordered a second season of Raised by Wolves, a serialized sci-fi series from master storyteller and filmmaker Ridley Scott (The Martian, Gladiator, Alien), which has immersed fans into the rich, intricate world of Kepler 22-b. The series, which debuted with three episodes on Sept. 3, has continued to be a strong performer in its second week on the platform, growing its audience by nearly 50% week over week.

“When I think of Raised by Wolves, I think of artistry; artistry in crafting a compelling storyline, artistry in the out-of-this-world production design, special effects and cinematography, artistry in our actor’s portrayals of these memorable characters, and artistry attached to the legendary work of Ridley Scott, Aaron Guzikowski and our phenomenal crew,” said Sarah Aubrey, head of HBO Max. “This chart-topping series beautifully weaves together Ridley’s hallmarks of sci-fi and horror while offering fans one of the most original storylines they’ve seen in some time. I can’t wait to see what’s in store for season two.”

“Being a dyed-in-the-wool advertising man, I was knocked out by the extraordinary campaign done by HBO Max marketing, which conveyed the ambitious storyline in such a provocative and tactile manner, and deftly positioned our first season of Raised by Wolves as a “must watch” show. It must have been a notable challenge to selectively plumb the riches In Aaron’s storylines. We were even happier that audiences have responded so enthusiastically,” said Ridley Scott. “We are already deep into the “layers” of season 2, as Aaron has begun to shape what we think will be another brilliant season to inspire the imagination.”

Raised by Wolves centers on two androids tasked with raising human children on a mysterious virgin planet. As the burgeoning colony of humans threatens to be torn apart by religious differences, the androids learn that controlling the beliefs of humans is a treacherous and difficult task. Scott serves as an executive producer on the series and directed the first two episodes, marking his television series directorial debut for American audiences. The series was created by Aaron Guzikowski, acclaimed writer and visionary behind the highly lauded film, Prisoners.

Critics have lauded the series, with IGN calling it “one of the most interesting sci-fi shows in years. Meanwhile, The Wall Street Journal heaps praise on Amanda Collin (A Conspiracy of Faith, A Horrible Woman), who stars as Mother, as “one of the most memorable female/female-like space entity since Sigourney Weaver’s Ripley in “Alien”—or the alien in “Aliens.” Collin’s performance, alongside her character’s counterpart, Father, played by Abubakar Salim (Fortitude, Jamestown), has been underscored as “top-notch” by Forbes.

What do you think? Have you seen the first season of the Raised by Wolves TV show? Do you plan to watch the second season on HBO Max?

When will Season 2 start? Hurry, hurry plesse. An update please?

My God! One of the best if not the best sci-fi series I’ve ever watched. Love,love,love it! Addictive.

Captivated by the most refreshing sci-fi story since 2001 Space Odyssey. I am definitely ready to watch season 2.

Incredibly good story and the acting is very believable. The program increases your vision of what could happen and the way we act today, very inspiring.