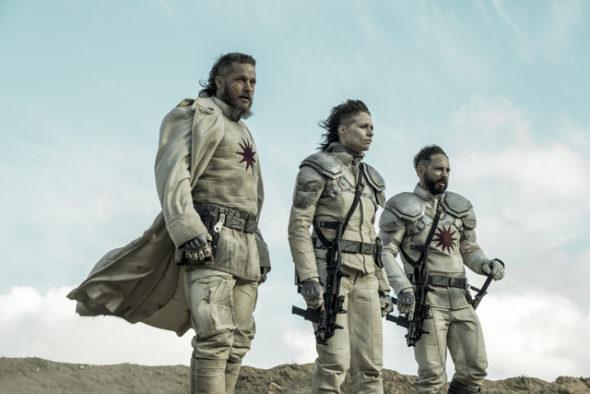 What dangers await Father and Mother in the first season of the Raised by Wolves TV show on HBO Max? As we all know, the Nielsen ratings typically play a big role in determining whether a TV show like Raised by Wolves is cancelled or renewed for season two. HBO Max and other streaming platforms, however, collect their own data. If you’ve been watching this TV series, we’d love to know how you feel about the first season episodes of Raised by Wolves here. *Status update below.

An HBO Max science-fiction drama series, Raised by Wolves was created by Aaron Guzikowski. Ridley Scott serves as an executive producer and directed the first two episodes. The show stars Amanda Collin, Abubakar Salim, Winta McGrath, Niamh Algar, Jordan Loughran, Matias Varela, Felix Jamieson, Ethan Hazzard, Aasiya Shah, Ivy Wong, and Travis Fimmel. The TV series revolves around two androids, Mother (Collin) and Father (Salim), who are assigned to raise human children on a mysterious virgin planet called Kepler-22b, after the Earth has been destroyed in a great war. As the burgeoning colony of humans threatens to be torn apart by religious differences, the androids learn that controlling the beliefs of humans is a treacherous and difficult task.

What do you think? Which season one episodes of the Raised by Wolves TV series do you rate as wonderful, terrible, or somewhere between? Do you think that Raised by Wolves on HBO Max should be cancelled or renewed for a second season? Don’t forget to vote, and share your thoughts, below.

*9/18/20 update: Raised by Wolves has been renewed for season two by HBO Max.

So good Ridley Scott at syfy movies classic Alien is the best I heard about it really scary mother has superpower fly up in air sunning amazing show love it so far. Finally got renewed 3 weeks ago for second season I can’t wait for next year see what happen. I have a few episodes left.