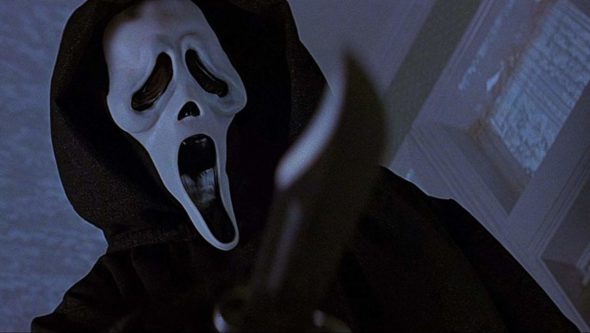 After two low-rated seasons on MTV, Scream has returned after two years away for a three-night third season on VH1. Has this horror series already essentially been cancelled or, could it be renewed for a fourth season? Stay tuned. *Status update below.

In the third season, titled Scream: Resurrection, the series’ setting moves to Atlanta with new characters and the return of the killer from the movie franchise, Ghostface (voice of Roger Jackson). Deion Elliot (RJ Cyler) is a local football star with a bright and hard-earned future ahead of him. Unfortunately, he also some dark and tragic secrets that could cost Deion his prospects, as well as his family and friends. The rest of the cast includes Mary J. Blige, Keke Palmer, Tyler Posey, C.J. Wallace, Tyga, and Giullian Yao Gioiello.

What do you think? Do you like Scream TV series on VH1? Should it be cancelled or renewed for a fourth season?

*Update: Scream has been cancelled, so there won’t be a fourth season (at least for now).

One i bet the whole reason for the low tv rating on the third season would be precisely because obviously yall just pulled the plug on the second season which was left up in the air like how can yall just leave folks hanging lmao what people supposed to habg on to!??? Hahaha nahhhh seriously mane yall needa really finish the damn story line like yall straight cliffhanging us forreal not cool

They should’ve kept up with the same story, season 3 was a let down and utter waste of time

The ratings are up over MTV and I think the story benefited from the shorter episode length. I don’t know how this show’s production cost are compared to its reality shows, but if VH1 wanted to get into scripted shows I think Scream is a nice start.

Personally I think since the show was pawned off to VH1 then they should honor the many pissed off fans that would like the Season 1 and 2 cast to have their story be given a proper ending. We were left with a cliff hanger and an open ended story.

Give it a Fourth season! This show was the best horror I’ve seen on television in awhile, the new cast was fantastic and definitely deserve another round with Ghostface!