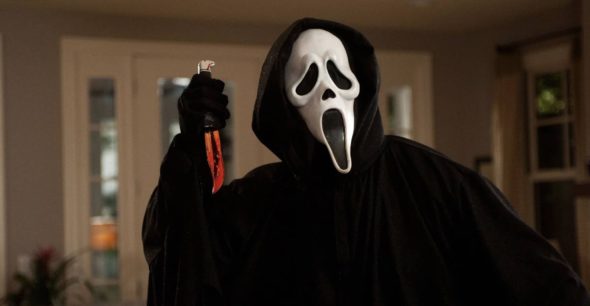 Is the third season of the Scream TV show on VH1 scary enough for you? Usually, the Nielsen ratings play a big role in determining whether a TV show like Scream on VH1 is cancelled or renewed for season four. If you’ve been watching this TV series, we’d love to know how you feel about the season three episodes of Scream. We invite you to rate them for us here. *Status update below.

In the third season, titled Scream: Resurrection, the series’ setting moves to Atlanta with new characters and the return of the killer from the movie franchise, Ghostface (voice of Roger Jackson). Deion Elliot (RJ Cyler) is a local football star with a bright and hard-earned future ahead of him. Unfortunately, he also some dark and tragic secrets that could cost Deion his prospects, as well as his family and friends. The rest of the cast includes Mary J. Blige, Keke Palmer, Tyler Posey, C.J. Wallace, Tyga, and Giullian Yao Gioiello.

What do you think? Which season three episodes of the Scream TV series do you rate as wonderful, terrible, or somewhere between? Should VH1 cancel or renew Scream for a fourth season? Don’t forget to vote, and share your thoughts, below.

*Update: Scream has been cancelled, so there won’t be a fourth season (at least for now).

If they would just pick a damn story and stick with it then this series would be so much better. It took a while for me to get into the original cast and story but eventually I got to where a I really wanted to see how the whole story played out. Season 2 left so many questions unanswered that it would have been great if they’d used Season 3 to tie up all the lose ends and make sense of the whole mess. It was such a huge letdown that Season 3 was an entirely different story and cast… Read more »

I seem to really like the new show I hated that it was only on for 3 days but it was.great ..hope they have a season 4 , only thing I would ask is please make it alil longer …love you ghost face

I didn’t like the show at all! It’s not good and it completely ruined the original movie which is a classic. The show makes no sense.

I hope they make season 4

Loving it …hope they keep it this time

I’m liking the new season so far! I’m so happy Ghostface is back!