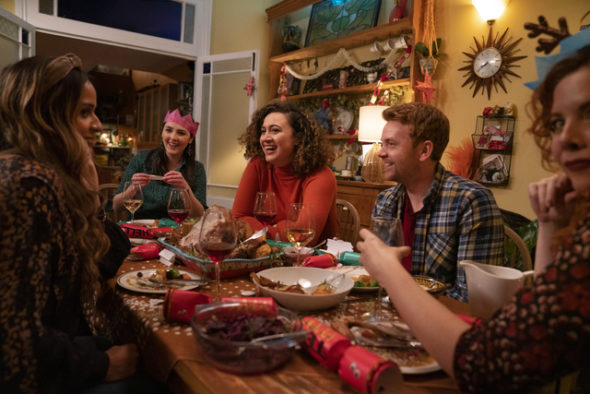 Can one night change your whole life? Has the Starstruck TV show been cancelled or renewed for a second season on HBO Max? The television vulture is watching all the latest cancellation and renewal news, so this page is the place to track the status of Starstruck, season two. Bookmark it, or subscribe for the latest updates. Remember, the television vulture is watching your shows. Are you?

Streaming on the HBO Max subscription service in the United States, the Starstruck TV series stars creator Rose Matafeo with Sindhu Vee, Emma Sidi, and Minnie Driver. The story revolves around Jessie (Matafeo), a twenty-something woman from New Zealand who is living in East London and juggling her two jobs, working in a cinema and as a nanny. One New Year’s Eve, Jessie’s life is changed overnight. Her roommate Kate (Sidi) drags her to a party where she meets a handsome and witty stranger named Tom (Patel). One thing leads to another and she wakes up at his place and realizes that she’s spent the evening with Tom Kapoor, one of London’s hottest movie stars. What Jessie thought would become an amusing anecdote soon turns into something more, as the couple realizes they can’t keep away from each other.

Unless they decide to publicize viewership, it is typically difficult to predict whether HBO Max will cancel or renew a show like Starstruck for a second season. In this case, the show has already been renewed for a second season. I’ll keep my ears open and an eye out for news and will update this page with breaking developments. Subscribe for free alerts on Starstruck cancellation or renewal news.

What do you think? Are you glad that the Starstruck TV show has been renewed for a second season? How would you feel if HBO Max had cancelled this TV series, instead?