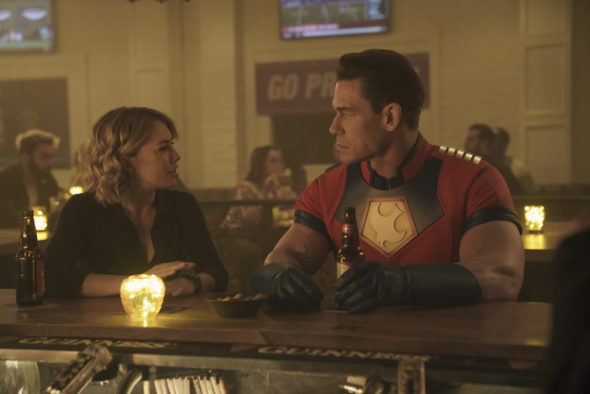 Will this show help viewers to see Christopher Smith differently? Has the Peacemaker TV show been cancelled or renewed for a second season on HBO Max? The television vulture is watching all the latest cancellation and renewal news, so this page is the place to track the status of Peacemaker, season two. Bookmark it, or subscribe for the latest updates. Remember, the television vulture is watching your shows. Are you?

Streaming on the HBO Max subscription service, the Peacemaker TV show was written and directed by James Gunn. It stars John Cena, Danielle Brooks, Freddie Stroma, Jennifer Holland, Steve Agee, Chukwudi Iwuji, and Robert Patrick. The story explores the origins of Christopher Smith (Cena) aka Peacemaker from the 2021 film The Suicide Squad. He’s a compellingly vainglorious man who believes in peace at any cost, no matter how many people he has to kill to get it. Other characters include John Economos (Agee), the warden of the Belle Reve penitentiary; Auggie Smith (Patrick) Peacemaker’s father; NSA Agent Emilia Harcourt (Holland); and Adrian Chase (Stroma) aka Vigilante, a district attorney and crimefighter who can heal quickly.

Unless they decide to publicize viewership, it is difficult to predict whether HBO Max will cancel or renew Peacemaker for season two. Since HBO Max isn’t ad-supported, it can take a chance on series it believes in, but sooner or later it comes down to production costs, versus viewership numbers. In this case, it appears to be a one-and-done show. I’ll keep my ears open and an eye out for news, and will update this page with breaking developments. Subscribe for free alerts on Peacemaker cancellation or renewal news.

What do you think? Do you hope that the Peacemaker TV show will be renewed for a second season on HBO Max?