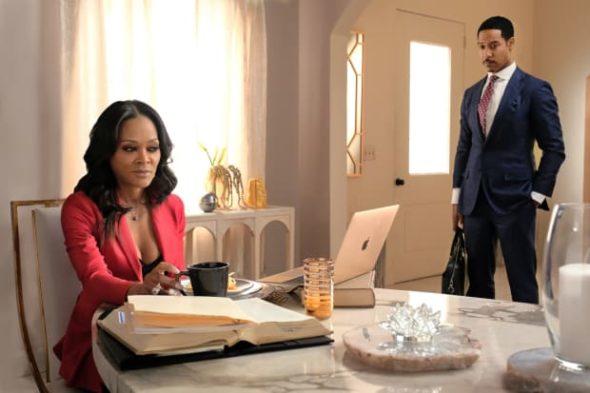 TV show description:
From Jamey Giddens and Will Packer, the Ambitions TV show is a primetime soap opera. Unfolding in Atlanta, Georgia, the family drama delves into the the ways sex, love, power, and politics play out in The ATL.

The series centers on former college best friends Stephanie Lancaster (Givens) and Amara Hughes (Atkins), who are now high-powered attorneys at odds in both the personal and professional arenas of their lives.

Stephanie is from a long line of lawyers. She is determined to take the reins of her family’s famous firm, and will not let anyone or anything stop her from achieving her goal.

Stephanie isn’t the only ambitious person in her household. Her husband, Evan (White), is currently the Mayor of Atlanta and dreams of serving as the state’s first African American governor.

A Texas native, and accomplished prosecutor, Amara is a newcomer to Atlanta and now plies her trade in US Attorney’s office. Her husband Titus (Cross) has taken the job of in-house counsel at a big pharmaceutical company helmed by Hunter Purifoy (Bosworth).

Mayor Lancaster’s sister, Rondell Lancaster (Evans) manages a restaurant called Thelma’s place. She has recently gone all-in on a grass-roots movement to combat gentrification and is steadfast in her commitment to it.

Rounding out this cast of characters is celebrated new fashion designer, Bella “Tru” Trujillo (Page). As the city’s first lady, Stephanie wears her designs exclusively, but Tru has her eyes set on a bigger prize, just like everyone else in town.


What do you think? Do you like Ambitions TV series? Should this OWN TV show have been cancelled or renewed for a second season?

Oprah, why are you letting them cancel this show??? I thought that you were a smart business woman. I hope BET or someone else picks it up if you will not. All that was needed was a little more advertising to really increase the viewers….and they would be addicted just as I and so many others are.
OPRAH… help!, DO something! DON’T cancel! PLEASE!

That was a great show and well written! I hope someone else picks the up show. It’ll be a big loss for OWN. All of the good programming is being canceled so Ill just find a new network to watch.

I strongly believe this was Robyn Givens at her very best in her acting career. I really enjoyed watching the series. I looked forward to another series, season 2. Great acting. It is very disappointing that the series was canceled. I hope there will be reconsideration.

I concur and I liked the writing. Gosh – I am so bummed that this show was cancelled? Why? Please bring it back and tell Ms Givens that she was great!

I strongly agree this was Robyn Given at her very best in her career. I really enjoyed watching the series. I am very disappointed and sad that it will not be returning. What Happened???

Please don’t cancel this show! The plot, cast and stars are amazing! Robin Givens is the best Vixen I’ve seen in decades!! Not to mention everyone is handsome or beautiful, great show

I love this movie, please bring it back