Ambitions is coming back! The series is returning with new episodes on November 12th at 10 PM. The series premiered in June, and the midseason finale aired in August.

Robin Givens and Essence Atkins star in this OWN series, and they will be joined by some new faces. Rick Hearst, from General Hospital, and Mara Hall, from Grey’s Anatomy, will appear in the new episodes.

OWN revealed more about the return of Ambitions in a press release. Check that out now.

“The midseason finale last August ended on an explosive cliffhanger when Senior Lancaster (Tony Vaughn) was murdered outside of his restaurant by a mysterious killer. In the series’ return, Rondell (Brely Evans) and Evan (Brian White) team up to demand justice for the murder of their father, however, a new threat emerges to keep both off the case. Stephanie (Robin Givens) has a checkmate moment when Amara (Essence Atkins) discovers her in Titus’s (Kendrick Cross) hotel room. This fuels Amara’s desires to take down the unstoppable Stephanie once and for all. Bella (Erica Page) faces every mother’s nightmare.”

OWN also released a new poster and preview teasing the return of the series. 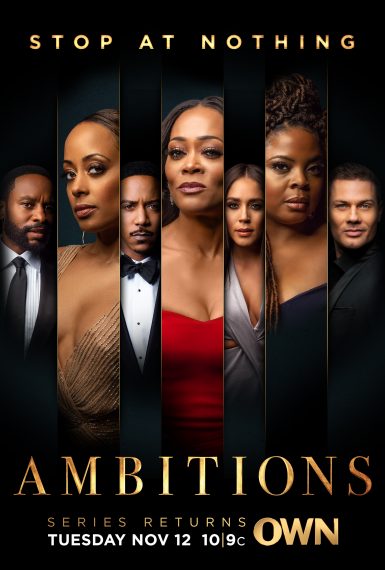 What do you think? Are you a fan of Ambitions? Will you watch the new episodes when the series returns?

Yes, I have been waiting on it!