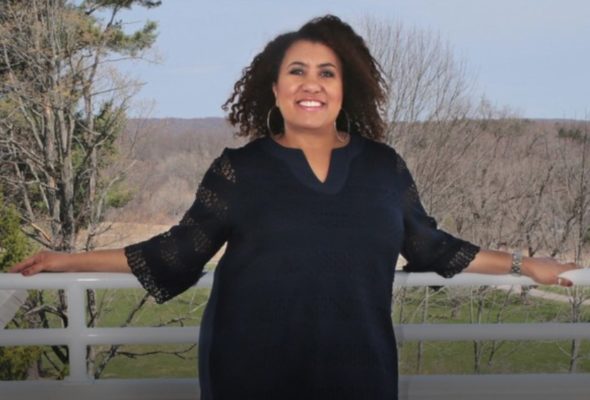 Get ready for Checked Inn. The new series is coming to OWN in November. The series will have a special premiere on November 21 before it premieres on its regular night on November 25.

“OWN’s new docu-series Checked Inn, featuring entrepreneur Monique Greenwood and the couples who visit her family-run, upscale bed and breakfast, will have its network premiere on Tuesday, November 21 at 10 p.m. ET/PT (after an all new episode of Tyler Perry’s If Loving You Is Wrong at 9 p.m. ET/PT). From Trooper Entertainment in association with Lionsgate TV, the series will air regularly on Saturdays at 10 p.m. ET/PT, beginning on November 25.

In 1995, Monique Greenwood pursued a newfound love for hospitality by opening her first B&B in Brooklyn, NY while also working as a magazine editor. Then, five very busy years later, she landed a dream job at Essence Magazine, the leading publication for African American women. Monique quickly rose to become Editor-in-Chief – even as she continued to run the B&B. Much to everyone’s shock, Monique eventually decided to walk away from her high-profile job at Essence. After juggling two professions for years, she wanted to focus on building the B&B business with her husband, Glenn, with the goal of creating a legacy they could pass on to their daughter, Glynn.

Today, Akwaaba Bed & Breakfast Inns is the most successful B&B business on the east coast and Monique remains the hands-on force behind it. She runs her now four inns the only way she knows how – as the heart and soul, the everything planner and the innkeeper. Ever-helpful, Monique even finds herself offering advice to her guests when they confide in her.

Set at Akwaaba’s Mansion at Noble Lane in the Poconos, Pennsylvania, this former Woolworth estate is where couples go to push back the world, re-ignite passion and celebrate life’s most exciting events. Things may not always go smoothly, but Monique – with Glynn under her wing – and the hard-working staff, make sure their guests have an experience they’ll never forget. Celebrity guests include two-time Grammy(R) Award-winning singer/songwriter Peabo Bryson, black hair care entrepreneur Lisa Price of Carol’s Daughter and Pastor John Gray and his wife Aventer.

Check out a preview for Checked Inn below. Will you watch this new series? Tell us what you think.

My wife and I love the show and think it is phenomenal. It is very invigorating to see how Mrs. Greenwood and her staff are so attentive to the needs of there guests. Her establishment offers a warm and inviting atmosphere where her guest can just push back the world and concentrate on what made them fall in love from the start. It also allows for relief of the everyday hustle and bustle of everyday life as we know it. All marriages are in need of a little repair and relaxation and this seems to be just what the doctor… Read more »

Thank you TV OWN, for putting this show called Check Inn,I love it and I wish I was a participate in the show God bless you all…❤️

Love the show….it makes thing for couples more realistic……don’t know if you have one in or near the Bay Area in California but if me and my fiance could get a weekend where no one can find us or know where we went until they see the who. Been together for 7 years and in those 7 years we have had someone or another living with us…..helping out. Valentine’s days 2017 he asked my to marry him. I said yes….I love Him so much and he works so hard to take care of me…..I have arthritis on top of that…I… Read more »

Love your show. I cannotvwsit is yo visit Noble Lane in January!

Love your show. I cannot wait yo make reservations for next year in the s Poconos

Love Love your show! Monique ; you and your family are so fun to watch!

Where are you located in DC at?

YESSS!!!! I will DEFINITELY be watching again. I watched the 1st episode. OMG!!!!! It brought me to tears, because I need this so bad w/my husband of 25 years. It is an excellent show. Beautiful staff & place. Hopefully, one day.

I will definitely watch. As a travel agency owner I love this!

I watched the first episode and I loved it! I remember when Monique Greenwood first left Essence, and I am in awe of what she’s accomplished.