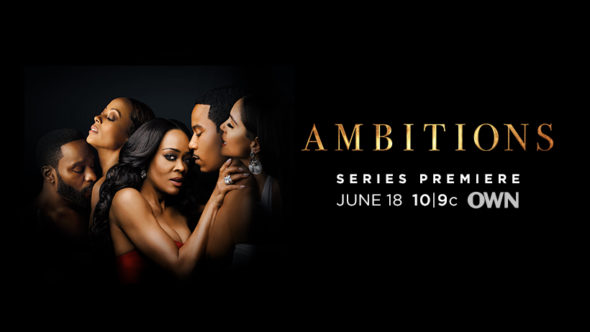 The Oprah Winfrey Network: OWN has several original scripted series and, while they don’t attract as many viewers as broadcast shows, they can develop quite a loyal fanbase. OWN’s newest entry into the Nielsen ratings race is the Ambitions TV show. Has it been ambitious enough in its casting and production values to score a return? Will Ambitions be cancelled or renewed for season two? Stay tuned. *Status update below.

What do you think? Do you like Ambitions TV series? Should this OWN TV show be cancelled or renewed for a second season?

*1/24/20 update: OWN has cancelled the Ambitions TV show so there won’t be a second season.

This show is brilliant and brings elements of today’s society along too.. The characters of this show all are diversified in their roles. Its truly amazing to watch. This show was filled with drama in 3 different areas (politics, streets, and relationships) …. I just don’t understand why this show was not promoted properly. If this show was promoted how 50 cent promotes POWER or how love & hip-hop or any new show were promoted it would be a major TV show. 18 episodes and NOT ONE you got tired of watching. BRING THIS SHOW BACK

This is one of the best Shows on Cable television Whites aren’t the only People with Drama in their Lives I Started watching Ambitions because I got Tired of Viewing Grey’s anatomy, The Good wife, as a Older Black man i was tired of watching Shows with only two black people in them; I Needed to see my people with the Same type of Issues”

Please Bring back Ambitious!!! It is a remarkable show and a lot of people don’t know about it I am guessing! I LOVE LOVE LOVE THIS SHOW! I just binge watched the whole thing! PLEASE BRING IT BACK! With love one of your number one fans