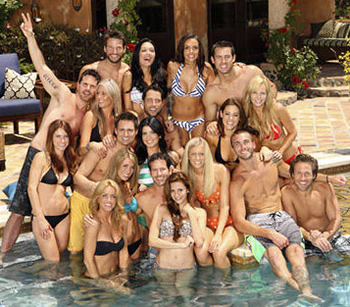 ABC’s reality show franchise of The Bachelor and The Bachelorette expanded this week as the network added a third program, Bachelor Pad. Will this new TV show perform as well as its predecessors or will it be quickly cancelled?

Hosted by Chris Harrison and Melissa Rycroft, Bachelor Pad brings 19 former contestants of The Bachelor and Bachelorette under one roof. While they compete to win the $250,000 prize, they also get to know each other and find new friends and romance. Each week, contestants are voted out of the competition by their housemates.

The two-hour series premiere of Bachelor Pad attracted a 2.2 rating in the 18-49 demographic and 6.37 million viewers. That was enough to put it in first place in the timeslot for its first hour and second place for the second hour.

While that’s a decent start for a summer reality series, ABC execs were likely hoping for a lot better performance for a show that’s connected to their Bachelor/Bachelorette franchise and received a whole lot of promotion.

New shows typically drop in the ratings for week two so we’ll have to wait to see if these numbers hold up. If they do, it seems reasonable to assume that ABC will bring Bachelor Pad back for season two next summer.

What do you think? Is Bachelor Pad a keeper or would you like to see it cancelled? What do you like or dislike about it?

It’s too much like Big Brother. And the fact that they were allowing everyone to sleep in the same room is almost sickening. Sorry Chris Harrison, but this show sucks even by Bachelor standards.

KEEP IT!! I think it’s really entertaining. The trashier, the better! Sex sells, people! I’m with Amy- if you don’t like it, then don’t watch it! Get over it!!!!

I haven’t even watched this and I say CANCEL!!! This show is taking up space and money that could go towards a better show.

TOO TRASHY….BORING…ALL LOOSERS ….CANCEL. ABC STOOPED TO A NEW LOW WITH THIS ONE.

ABC has stooped to a new low with this one! My friends and I have decided not to waste our time on such trash. If they need to show their bodies in such disgusting ways to find a man or win the money, they are all loosers to begin with. Chris H. sons must be embarrased to know their father is promoting such trash especially on primetime tv. we say CANCEL IT!!!

ABC has stooped to a new low on this one! my friends and I have decided not to waste our time on such trash. I find it hard to believe Chris, who is a father of 2 young boys, would even be part of such a show. How can his sons attend school. etc knowing their father is promoting this trash and in primetime tv at that! How embarrassed they must be! This show just goes to show what women would do for money, they are prostituting themselves for a few dollars.And to have them all in the same room… Read more »

Definately CANCEL!
First off, I’m so totally sick to death of Melissa Rycoft. Don’t even get me started.
Most people go on shows like this because they are egotist and crave notoriety. They don’t have a normal sense of self respect.
You don’t have to agree with me, that’s just my opinion.
Will I watch the show? No. Will I condemn those who do? NO.

all i have to say is that if you don’t want to watch it.
don’t watch it.
but some people do.
so get over it.
let people have their fun if that’s what they’re interested, it doesn’t harm you if you’re not watching it.
so.

I’m with kuniva. Cancel it. We do NOT need more bachelor/bachorette crap. And we never will.

Turned it off halfway through. Dumb, boring. CANCEL!!!!!