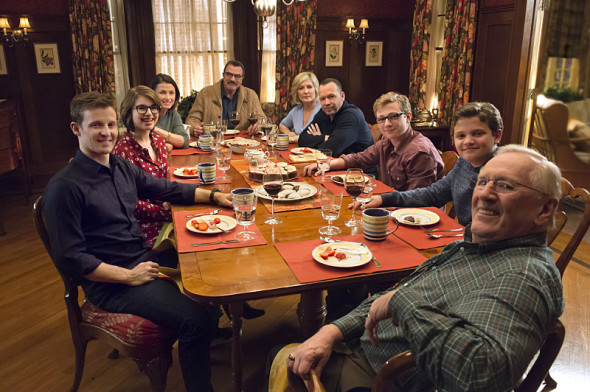 I want it to go on FOREVER. It’s my favorite show. I love every character and every episode.

What makes this such a good show is that the characters are real and believable, not cartoonish like many other shows.

Absolutely the best show still on the air.. The entire list of actors and actresses are wonderful. The dinner scenes are a wonder to see. Please keep it going CBS.

I love this program, the dinner scenes and how they act towards

Excellent acting by all characters

Great show!! love all the family.Reminds me of my youth family sunday dinners.
Keep it going!!

Love the show especially the the close family relationship!!

Love it; keep it going.

CBS has just taken off Blue Bloods from XOD, (on demand), UNLESS we pay $7.00! Why? Not fair. We have never had to pay XOD before. We can’t stay up until 10:00pm. Love the show and all of the actors. Great casting! Will we ever be able to see new shows?

I’ve watched a few CBS shows on CBS All Access and have been able to watch recent episodes for free (with commercials).

CBS should change the time slot to another weekday starting at 9 PM. It’s very popular because it’s a decent show.

do like I do and tape the shows you can’t watch.

I love every component of the show.
Danny cracks me up when he smacks the bad guys in the head. The chemistry between the actors is so amazing. They are so believable one would think they are truly related. Keep going for at least 10 more season. Good luck

I watch every Blue Blood show when it is on. I wish I could watch season 7 but it is on too late on Friday nights. Waiting for them to start showing season 7 earlier in the day. Is there going to be a season 8.

Very disappointed in 7th Season Blue Bloods because very few dinner prayers as a family. WHY???
As a woman of faith I was so very pleased in the past Seasons with their faith and prayers during dinner.

The networks need to drop all these show that are on for 6 weeks, then take a 3 month vacation, leaving us with nothing to watch. We don’t do re-runs, if I see it once, why would I want to watch it again? How long can it take to shoot a one hour show..For the money these people make we should see a new show 52 weeks a year..look at the daytime soaps..

I look forward every week for a new episode. Have watch from day 1. Great acting and good writing are main reasons why it’s in the top 10 every week, even in reruns. The biggest issue will be Tom Selleck. How long he wants to still act..? Second biggest issue will of course be Jamie and Eddie. Their situation has been dragging on for a little too long. It would be nice if this settled in the first few shows of the new season. I also like the plot lines that they have been coming up with. It’s also nice… Read more »