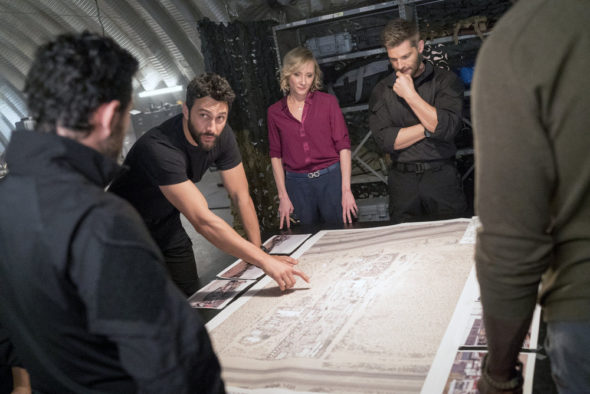 REALLY !!! THE BRAVE TV SHOW ..I LOVED THAT SHOW ..IT WAS SO GOOD AND EXCITING ..ALWAYS SITTING ON THE EDGE OF MY CHAIR CZ SO MUCH ACTION IN IT …I WATCHED SEAL TEAM FOR 2 WEEKS ..AND THAT SHOW WAS PUTTING ME TO SLEEP SO BORING ..AND I ALSO LOVED VALOR …AND ITS CANCELLED TOO …THE TAKEN HAS BEEN CANCELLED ALSO BUT THEY ARE LOOKING TO FIND ANOTHER STATION TO TAKE IT ..I HOPE THEY DO ..THEY SHOULD DO THE SAME WITH THE BRAVE ..AND VALOR …..THIS IS ALL DUE TO REALITY STUPID SHOW ..THAT STUPID PPLS WATCH NO… Read more »

Absolutely agree. I love the Brave couldn’t get into the Seal team at all. Bring back the Brave

I really enjoyed watching the cast of The Brave — even though there were no “familiar faces”, the scripts were on-topic and characters were very likable and related well with their diversity. I did not like Seal Team, which had similar scenarios. Hey, NBC — Give The Brave another chance like you did for Midnight Texas!!

You’ve got to be kidding me!! Once again, they’ve cancelled a really good show that both my husband and I were looking forward to—and they leave the totally dumb shows on!! Not happy!!

Don’t like this at all! So much better than Seal Team. It had *GASP* interesting characters which Seal Team does not.

I’m so disappointed by this cancellation. The Brave topped the list of great new shows. NBC made a poor decision.

The Brave was so much better than Seal Team. I’m very angry to see it cancelled while so many dull, unimaginative television shows clog prime time. And to leave us with a cliff hanger on top of it is terrible. Hopefully some other station picks it up and gives it a better time slot.

I agree with everyone on here. The Brave was better than any of those other military or cop shows. Entertaining and suspenseful. NBC is a joke. No wonder cable beats the hell out of network tv. Keep the Kardashians and the rest of the no talent shows. Cancel stuff thats well done. Unbelievable NBC. You have done it again!!!

This is the news that I have been dreading. I really liked this show. I thought it was better than SWAT and Seal Team. I sure wish they had been given a second season. Dang!!!

Boo! “The Brave” was easily as good as “Seal Team”. Not taking anything away from David Boreanaz’s latest vehicle, it’s a great show, but “The Brave” was exciting and suspenseful, using little-known actors – okay, and Anne Heche, who was good in her role. But people are stupid, as evinced by the amount of pure dreck still on the air, while good shows get canned for lack of a discerning audience. Aand that is that. Wish it could’ve gotten at least one more season. Hope the actors find work again quickly.

Mike Mickelberg
Reply to  Will

I thought the brave was by far better then seal team. I am so mad it won’t be back. I hope it gets picked up somewhere else

And this is why I don’t like to watch NBC. Every time I get a show I love, it gets cancelled.

Pissed. Hope Netflix pick it up.!

I thought The Brave was one of the Best new shows this year, seconded by Seal Team. I am so very disappointed that The Brave has been cancelled. NBC has really let me dow this time. I am not in the 18 – 49 demographic. I am a Baby Boomer and we are the demographic that still watches TV. The 18 to 49 group are too busy playing video games and Netflix.

I am also of the baby boomer age.

Its bull **** i can’t believe they canceled another great show i am pissed.

I really liked The Brave. And I’m a 60 year old grandma 🙂