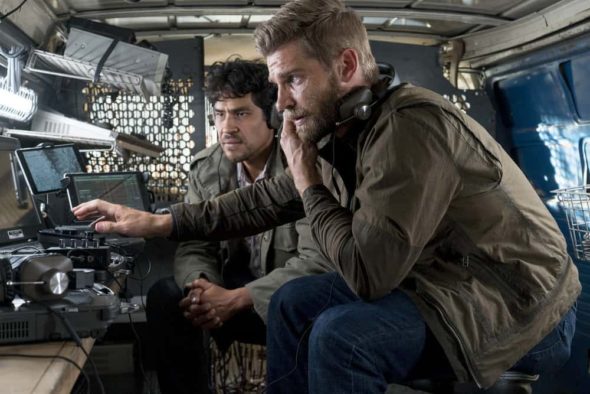 Have you been watching The Brave TV show? Do you think NBC should renew the freshman television series for a second season or not?

Despite following The Voice, The Brave‘s first season hasn’t been performing all that well in the ratings. So far, season one is averaging a 1.03 rating in the 18-49 demo and 5.093 million viewers, making it one of NBC’s lowest-rated series for the 2017-2018 season.

However, it seems the series does have a passionate following. Fans have given The Brave a 9.53/10 rating in our Viewer Votes feature.

Some believe that The Brave has already been cancelled because NBC did not order additional episodes to give the military drama a full first season. However, Deadline reports that season one was intended to have just 13 episodes.

While the ratings have not been good, the official word from NBC is that The Brave is still in the running for a second season. There are four episodes left to air and the series returns on Monday, January 8th. The ratings for those episodes will likely carry a lot of weight when the NBC execs decide if they want to take a chance on a second season.

What do you think? Should NBC renew The Brave for a second season or, should they cancel it instead?

I could not will till the brave was on! It is a far better than Seal Team. NBC made a bad mistake. Bring the team back.

I thought this was the best TV program on the air. Not only watched every episode when it came on but, recorded them on DVR and re-watched them several times. Most the shows on TV I could care less about. This show made me be home to watch it because it was that good. The last show I felt I needed to plan to be home watch was Miami Vice, so that tell you home much I enjoyed the show ” The Brave” I would love to see it renewed with all the character and we need to see IF… Read more »

The Brave, I left watching shows on CBS to watch, just saying!

I loved the show The Brave. Please bring it back for a second season and more!

NBC DID NOT give this series a chance! The show is awesome and I am over the top pissed off that it’s been canceled. Why do these non-cable networks always keep the dumb stuff. Please reverse this decision and keep this show!

I don’t want to see this series cancelled. I really enjoy this show. There is very little on TV that I find worth watching and when I find something I like the networks decide to cancel before it even has a chance. So please DO NOT CANCEL!!!

This series should be brought back. Much better characters and story liine than the current ‘Seal Team’ with David Borenmetodeath. However, they do need to add a bomb-sniffer.