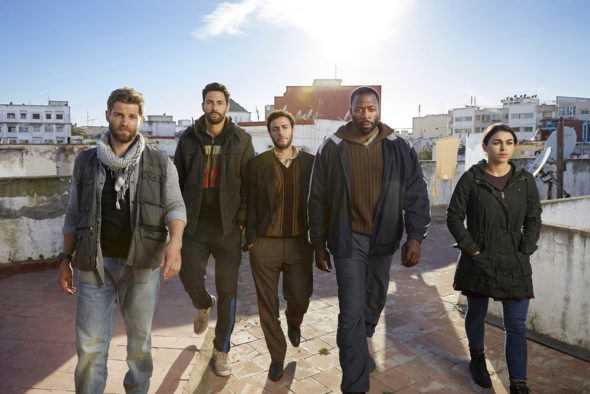 Whether in D.C. or on the ground, the members of this resilient, elite team — both in D.C. and across the world — share an unparalleled commitment to liberty. While they usually face seemingly insurmountable odds, they are dedicated to completing their missions successfully, regardless of the dangers and challenges thrown at them.

Series Finale:
Episode #13, “Close to Home” Part 2
With just four short weeks before Dalton and his team finish their deployment, they continue to race the clock on a high-stakes mission. As they learn more about Hoffman (Guest Star James Tupper), Patricia and the group attempt to use his intel to save innocent lives, but the information comes at a cost. (Courtesy of NBC)
First aired: January 29, 2018

What do you think? Did you enjoy The Brave TV series? NBC have cancelled or renewed this TV show for season two?

I just finished watching the brave season 1 in Mola TV and it’s really the best show in its genre. I really love the show and became really upset that the season 2 was cancelled.
So please, please continue with season 2. It’s trully the best show on its genre and don’t really understand about the unjustified rating on season 1.

The Brave was the best military show out there in tv land. It never got overwhelmed with home or personal drama. It was always about the mission and the team. Great acting and casting. I was not happy that it got cancelled after just one season. It was well written and well acted.

This was by far the best military show out there I am usually a sci-fi fan but this show caught my attention , this is my first and only military show I could actually get into and watch and it’s a shame they cancelled it !! The acting was amazing and the stories were so unique and heart felt I truly hope they bring it back and do a second season with the same cast because the first season was magic and I’m not the only one they cancelled it before it even got a chance , hopefully someone else… Read more »

I mostly want Dalton and Jaz together, because they love each other. I really like this couple so much. Why cancel this good TV series? The Brave is my most favorite show in this year. No one can instead of it. Please must let it have season 2

Pls. bring the show back. It was a great show!!! Great plot, amazing actors. If Seal Team was given another chance and it isn’t even close to being as good as The Brave, why cancel this one? It had loyal followers who looked forward to it every week. BRING IT BACK!

Awesome show, hate it was cancelled. Please bring it back.

Yes we enjoyed every episode so sad I said it ended!

Very sad that The Brave has been canceled! It is such a great show and I hope they’ll bring it back!

So very sad to see The Brave cancelled. Good show and well acted. Would LOVE to see it return!!!

Is “Brave” returning to television? It was such a great show, pretty clean. We need shows like this to view, compared to many new shows lately which are terrible. Please bring it back, I’m sure there are others out there who will agree with me. It was a very enjoyable show. Thanks.

It was a great show, I wish they would bring it back

Another Great Show Gone. Like To See It Come Back.

I love this show.Its let the younger kids show how life is not these stupid show what’s on now.please let this show returned.