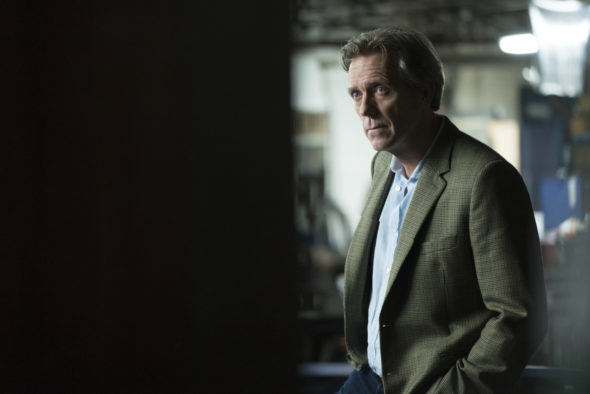 How many chances remain for Dr. Eldon Chance? Has the Chance TV show been cancelled or renewed for a third season on Hulu? The television vulture is watching all the latest TV cancellation and renewal news, so this page is the place to track the status of Chance, season three. Bookmark it, or subscribe for the latest updates. Remember, the television vulture is watching your shows. Are you?

Streaming on the Hulu paid subscription platform, Chance stars Hugh Laurie, Ethan Suplee, Greta Lee, Stefania LaVie Owen, Clarke Peters, Brian Goodman, Paul Schneider, Diane Farr, Michael McGrady, and Ginger Gonzaga. The psychological thriller centers on Dr. Eldon Chance (Laurie). A forensic neuropsychiatrist living in San Francisco, Chance finds himself drawn into perilous cases involving his patients. In season two, he is something of a changed man. Whether those changes are because of his traumatic brain injury, or due to the fact that he has killed someone, remain to be seen. Regardless, he and D (Suplee) are now on a crusade to rescue Dr. Chance’s patients from their victimizers.

Because it they originally issued a two-season order, fans didn’t have to spend the first season wondering whether Hulu would cancel or renew Chance. Season three does not kick off with that certainty. Will the cast and crew want to continue, even if the streaming service is willing? It’s hard to predict the fate of streaming TV shows, unless their platforms decide to publicize their viewership. Although I have no strong gut feeling, I’ll keep an eye on the trades and update this page with breaking developments. Subscribe for free updates on any Chance cancellation or renewal news.

1/9/2018 update: There will be no season three of Chance. Hulu has cancelled this TV series. Details here.

What do you think? Do you think the Chance TV series should have been renewed for a third season? How do you feel, now that   Hulu cancelled this TV show?

I actually just found this show today. (Oct. 28 2022). It immediately caught my attention and now I just found out that the show is canceled. Please re-new, hulu!

I just found this show couldn’t stop watching it so pissed there isn’t a chance for season 3. Hulu please get cast together I want season 3!! I hate shows that you could go somewhere in next season and networks cancel it. So disappointing!!!! If the doc ,d, Nicole Carl, and Lucy come back I think people will start watching I know I will along with all the ppl I told how mad I am that it’s canceled.