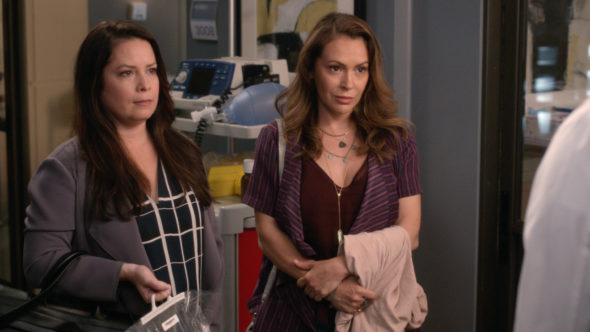 Charmed fans may soon see the original series cast together again. Alyssa Milano and Holly Marie Combs reunited on a recent episode of Grey’s Anatomy as a pair sisters. Following that appearance, the possibility of the pair bringing their Charmed characters back to life started being talked about by fans.

A new Charmed is currently airing its second season on The CW. Melonie Diaz, Madeleine Mantock and Sarah Jeffery star in the new series. The original Charmed aired for eight seasons before it wrapped in 2006.

Alyssa Milano was asked about the possibility of a Charmed reunion during a recent episode of Access Hollywood, and she did not toss it aside. The actress admitted that she and Combs had talked about bringing their Charmed back to life. She even teased the possibility of movies on Netflix.

She said the following, according to The Wrap:

“I mean, Holly and I talk about ‘Charmed’ movies a lot, you know. Because they have the new ‘Charmed,’ which is on The CW, and it’s a very different storyline… It’s a different show and it felt like they were trying to capitalize off the name but not continuing on the storyline or the legacy. So it was tough. But we have been talking about maybe doing some films for Netflix. And so I think that would be really fun and I think it’s a great way to celebrate our fans that have stuck with us for such a long time but still give it new blood.”

yes bring one to netflix and have one on cw thats two times the charm I say the more the merrier!!!!!!

II would definitely watch a reunion show. Even would like to see the first actresses doing their series with the kids grown of course there’s still plenty of demons to take out. I still watch the reruns over and over again I even have DVD’S

I’m not a big fan of the new Charmed.
BRING IT ON CHARMED ONES I WOULD LIVE IT!!!!

I don’t like the new charmed. I would love to see the originals back including Cole and Leo.

The reboot is much better than the original in my opinion. I’ve been a Charmed fan forever. But the new series is more satisfying to me. I feel like the characters are far more relatable and more easier to connect with than how the original women played the roles. There’s way more diversity which is something the original show didn’t have. I think the new ones have made the show their own and made it better.

Nostalgia all the way!! Watched that original series al the way through a bunch of times, and currently making my way through it again. Haven’t watched one episode ever the reboot, don’t want to! Would love to see something, a Netflix movie at least if not a new series with Holly, Alyssa, Shannon, and rose, not to mention Brian, Julian, Dorian, Drew, Finola, and Jennifer!! It would be awesome and go so far!!!

I would absolutely go crazy if y’all had the charm

I would absolutely go crazy if y’all had the charm show on Netflix! I’m talking about the old-school ones yes! I watch charmed every day

I would so watch a Charmed movie or series reboot on netflix! I’m constantly trying to find a replacement show for Charmed, the one and only true one. CW should have renamed the show not stole the name for a clearly different show.

I watched the original and am a fan but I also watched the new Charmed and a fan of that one also. I think most fans were expecting the new one to be the same as the original or at least the sisters grandchildren carrying on the legacy of the original and that’s why most of the fans put down or just dont watch the new show. But I wasn’t expecting anything I just went into it like it was a different story of three sister’s and ended up loving it. Which I’m almost sure if fans of the original… Read more »

Ive tried to watch the new charmed and its just not a worthwhile reboot. I was and still am a devoted fan of the original charmed. I would absolutely love to see my favorite charmed girls in netflix movies. I am a fan who still misses the original series.

Yes! I would so watch that. I don’t like the new Charmed. Those women in the original series brought life to the show. They made that show! It’s not the same without them in there somewhere.

Yes come back alyssa and holly. I miss and love charmed always. I can watch a millon types. I always watch the show. Then when the show was ending i was pregnant with my first daughter. And i had her right after the finally episode. And i named her alyssa after u because the show meant everything to me around those times. And i loved the name alyssa too. I would love a come back for the whole gang

My 6 year old daughter’s middle name is Paige for the same reason!!