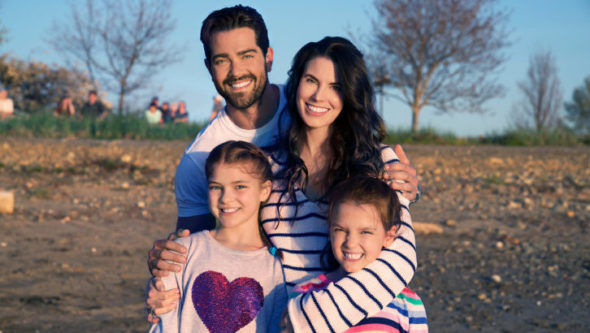 What does the future hold for Abby and Trace? Has the Chesapeake Shores TV show been cancelled or renewed for a fourth season on Hallmark Channel? The television vulture is watching all the latest cancellation and renewal news, so this page is the place to track the status of Chesapeake Shores, season four. Bookmark it, or subscribe for the latest updates. Remember, the television vulture is watching your shows. Are you?

The third season of Chesapeake Shores averaged a 0.21 rating in the 18-49 demographic with 1.57 million viewers. Compared to season two, that’s down 10% and 12%, respectively. Learn how Chesapeake Shores stacks up against other Hallmark Channel TV shows.

Will Hallmark cancel or renew Chesapeake Shores for season four? The ratings for season three are pretty much on par with the second season’s so I suspect that the show will be renewed. I’ll update this page with breaking developments. Subscribe for free alerts on Chesapeake Shores cancellation or renewal news.

2/10/19 update: Hallmark has renewed their Chesapeake Shores TV show for a fourth season.

What do you think? Are you glad that the Chesapeake Shores TV show has been renewed for season four? How would you feel if Hallmark Channel had cancelled this TV series, instead?

OUR FAMILY LOVES THE SHOW, WE ARE LOOKING FORWARD TO SEASON 4

Please bring back Chesapeake Shores. I been watching it since season 1. I would really miss it.

I love this show!!! Please renew! Great cast and story line too!
I love Hallmark movies for the family to watch together without worrying
about the content. Thank you!

I Love this show. One of the fresh, clean family dramas available today. Certainly refreshing in this day and age.
I’d Love to see another series please

LOVE the show. I am 50 but watch the show with my daughters who are 20 and 23 respectively. It is great to find a family friendly show that appeals across the generations.

Great show, please renew! I enjoy this series, it has a depth that doesn’t exist in most of the programs. I enjoy watching it every week and hope it has many more seasons.

We have been watching Chesapeake shores since the first season. We would be very very disappointed if you canceled it! It is nice to watch a good family show like this one. We are both over 60 years old and like it a lot.

WE LOVE IT!! PLEASE DON’T TAKE CHESAPEAKE SHORES OFF THE AIR !!!!!

I have been watching cheasapeak shores since the first season. I would be very disappointed if you canceled it! I think it’s real it’s what families really go through, it’s raw and it’s real and I LOVE IT!! PLEASE DON’T TAKE MY CHESAPEAKE SHORES ANYWHERE!!

What a disappointment! Rename it “Canada Shores” . I SO wanted to like this show, but it is cookie cutter! There are very little pines on the Eastern Shore of Maryland. All WHITE people??? Give me a break! No steamed crabs, no crab cakes. No mention of Marylander’s obsession, The Ravens, The Orioles. Sigh! Such good acting but no substance.

Twin daughters? Since when? Those girls are 2 years apart in age

“Chesapeake Shores” is a colossal bore. It always has been, but it is worse this season. Everyone whines— enough already. Stick a fork in it.

There are these buttons on your remote that actually changes the channels…didn’t know if you were aware of this feature or not…. 🙂

PLEASE PLEASE PLEASE renew Chesapeake Shores for a fourth season!! I’m older than the age demographic for the ratings, but I and several of my girlfriends and sisters have been ANXIOUSLY awaiting Season 3, and loved the premier!!! Love the show!! It’s clean, has great family values, real life struggles, and is oh so poignant at times.

Ditto to Paula’s comment. I wish the season was longer. Please, please renew Chesapeake Shores for another season

I love Chesapeake Shores and The Good Witch And Where the Heart!! These shows has NO violence or sex or falgur language!! You can’t find these shows on regular channels. I realize the ratings are lower than main stations ratings, but we fans that would normally have the TV off has something to watch and smile while watching.

Wow! I cannot believe you want this show renewed? It is so fake, so non-Chesapeake, non-Marylander.