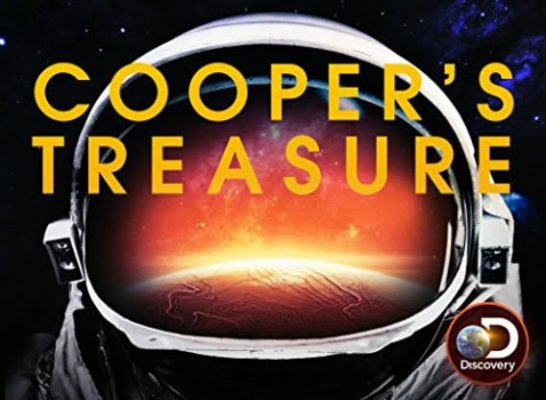 The docuseries follows Darrell Miklos as he searches for hidden treasure using a map made by NASA astronaut Gordon Cooper over 50 years ago.

Read more about the renewal from Discovery Channel below:

Darrell Miklos, treasure hunter by trade and by birth, sets out once again to unearth sunken riches in an all-new season of COOPER’S TREASURE. Armed with a treasure map created in secret over 50 years ago by NASA astronaut Gordon Cooper, Darrell sets out to the blue waters of the Bahamas to track down the whereabouts of 11 wreck sites that Cooper had found and catalogued as having tons of silver, gold and other priceless treasures. COOPER’S TREASURE returns to Discovery Channel this summer.

Considered one of NASA’s original space pioneers, Gordon “Gordo” Cooper discovered troves of information about what lies on Earth’s sea floors while orbiting the planet in the 1960s. Among his findings were more than 100 anomalies in the Caribbean, which he secretly transcribed onto a map that he believed could reveal vast amounts of treasure. Before his passing, Gordon shared this secret with long-time friend Darrell Miklos in the hopes his exploration would continue, and ultimately uncover treasures of the old world.

Last season, Miklos located a shipwreck tied to Christopher Columbus using Cooper’s intel. But within hours of finding the wreckage, a rival treasure hunter made a competing claim and the government shut down the hunt, tying up Miklos’s search for years. Despite this disappointment, Darrell’s discovery was proof that the maps could unearth riches.

Now, Darrell has just eight weeks of cash left to uncover another shipwreck that he can salvage. After finding a box of photos of the Bahamas and a list of eleven wreck sites that Gordon tracked, Darrell sets out with new clues and modern equipment to decipher this brand-new map, leading him to what could be the richest wreck of his career. The stakes are high and the money is low, and if the evidence doesn’t bring him to a motherlode discovery, Darrell’s treasure hunting career could be over forever.

What do you think? Have you seen Cooper’s Treasure? Will you watch the new season?

Can’t wait to see what they can find. I liked the last series, just wish they had a better time slot.

I am very excited to hear about season two. Just the mere fact that an opportunity exists to find lost treasure is amazing. The way Gordon Cooper marked the targets from space is another element that intensifies the excitement of the hunt.
If another diver is needed or money to raise I will be happy to volunteer. To me just being a team member would go beyond words.
Hope there will be season 3 and 4.

Allegedly ‘marked the targets’. But technologically impossible, as any competent reporter not mindlessly pimping a TV show could determine with some genuine ‘journalism’. Cooper’s capsule did NOT carry a ‘secret military magnetometer’ to seek Soviet nuclear weapons, Cooper took a few dozen photos [not thousands], none over the Caribbean. On his only daylight pass over Turks & Caicos he was reporting on various experiments in progress and looking north towards Florida, not down. He couldn’t have noted latitude and longitude of ‘anomalies’ on the surface since he had no instrumentation to provide such data, and he couldn’t keep such imaginary… Read more »

I very much enjoyed the show, and was excited to see more episodes on the Columbus era find. Now I read on here that the government shut that down. If they do another season I really hope we get to see them find the shipwreck this time.

Loved the series. Would like to see it come back on soon.

Great show with interesting exciting story telling. I don’t buy that they will find that gold but the search is the fun part.

love the show please bring it back

Nobody seriously involved in the real space program believes this story for a second. Enjoy the fantasy world if you must, but don’t confuse it with the real world.