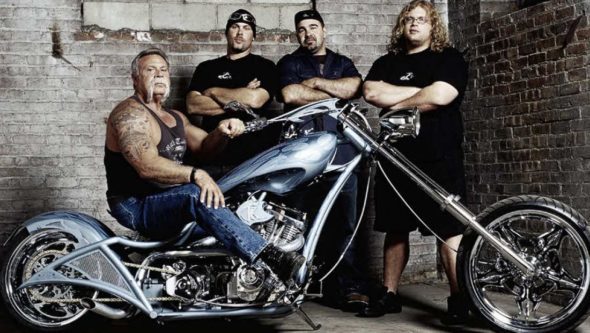 American Chopper is ready to ride again. Discovery Channel just announced the TV show will return for a 12th season in February.

Rev your engines, CHOPPER fans! Two of the most legendary motorcycle builders ever, Paul Teutul Sr. and Paul Teutul Jr., return to Discovery Channel for an all-new season of AMERICAN CHOPPER, premiering Tuesday, February 12th at 10PM ET/PT. As masters of their craft, the Teutuls push their design abilities to the limits, creating one-of-a-kind choppers via their renowned bike brands, Orange County Choppers and Paul Jr. Designs.

Motorcycle madness returns this season with even bigger bike builds. While the Teutuls continue to work with world famous athletes, Forbes 100 businesses and celebrity clients to evolve their businesses with the changing customized bike market, Paul Sr. takes a risk at Orange County Choppers as he moves his bike designs in a different direction. However, he also jumps at an opportunity to go back to his roots, designing a throwback line of affordable motorcycles. Meanwhile, Paul Jr. – working to keep up with looming deadlines as he takes on new concepts and builds – challenges himself to build a streamlined bike for the MLB Network, all to impress his father who recommended him for the job.

Over the past year, Paul Sr. and Paul Jr. have taken steps toward mending their once fractured relationship, and after rebuilding the Yankees-themed chopper together last season, the father-son duo are moving past their differences this season, restoring a 1951 Buick together.

Faced with the challenges of a changing market and a need to build mind-blowing bikes, the Teutuls must push their limits on every signature build, and in true Teutul fashion, antics are abundant as Paul Sr., Paul Jr., and Mikey continue this wild ride.

What do you think? Are you a fan of American Chopper? Will you watch the new season?

So happy to see their returning really enjoy their show

So excited about the show, really missed this family and the artwork they create!!!!

Best thing for the DISCOVERY CH Thanks for RENEWING the show.. Happy trails to you…AMERICAN CHOPPER.