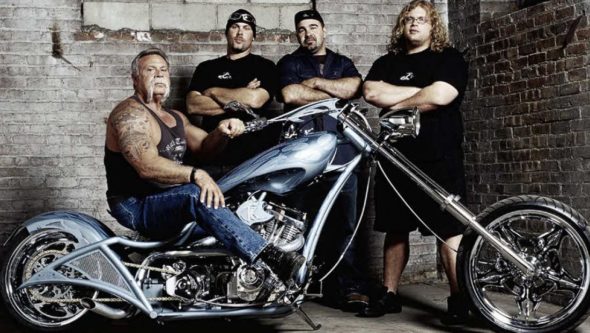 American Chopper has a special episode planned! A special is coming up next month just in time for Father’s Day. The series will have a two-hour Father-Son reunion episode.

Discovery Channel revealed more about the special in a press release. Check that out below.

“Tune-up your engines, motor fans and tune-in to a brand-new 2-hour AMERICAN CHOPPER special, airing Tuesday, June 9 at 9 PM ET/PT on Discovery Channel. Paul Teutul Sr. and Paul Teutul Jr., two of the most legendary chopper craftsmen, are back to conquer unfinished business. The infamous father-son duo have been on a wild ride, and now after spending years trying to rebuild their fractured relationship, they return to the garage where it all started in hopes of building a custom bike together for the first time in over a decade.

In the special, world-class motorcycle builders Paul Teutul Sr., owner of Orange County Choppers, and Paul Teutul Jr., owner of Paul Jr. Designs, find out that the original Orange County Choppers building is going to be torn down. They revisit the shop to pick up a few items that were left behind and reminisce on the past. Overcome by the history of the building, Paul Jr. jumps on the opportunity to ask his dad to build a bike together. Paul Sr. agrees to the build and the two set out to work on a custom chopper for one of the largest distributors of exterior and interior building products.

But complications arise between the father-son duo as they get to work on creating a one-of-a-kind chopper. Paul Sr. and Paul Jr. have their own unique bike styles and when Paul Jr. pushes for more creative input, the entire build is thrown into jeopardy. Will the build prove to be too much for the already fragile father-son relationship? Or will the Teutuls finally be able to leave the past behind them and use the build as the starting point for a new chapter?”

What do you think? Are you a fan of American Chopper? Will you watch the new special?

when will the show be aired?
I work for ABC Supply and wanted to see the show .
have been a fan for yrs

Can’t believe you showed the dumb COMING TOGETHER or whatever instead of the American Chopper special !!! ALOT of fans were disapointed !!! And for sure DID NOT WATCH ITS REPLACEMENT!!

always love American chopper even without drama and difficulties. nothing better than family in working things out. At wish them the best. And I can wait to see this Episode. Love you guys can go forward

I still love the show. Love to see it back.

I won’t watch it, just too much drama and BS, time to move on, they had their spotlight and wasted it.

Will definetliy watch! Have been watching since the beginning would not miss it.

Its all show, no reality in a reality show.