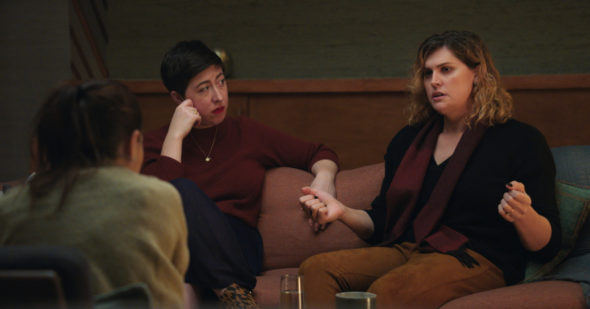 Showtime is ready for more Couples Therapy! The network has renewed the docu-series for a second season. Season one is currently airing on the cable network on Fridays at 10pm.

Showtime did not reveal a premiere date for season two of the series. Season one needs to wrap first after all. The network shared more about the renewal of Couples Therapy in a press release. Check that out below.

“Today, SHOWTIME announced it has picked up a second season of the acclaimed docu-series COUPLES THERAPY, from Sundance Award winning filmmakers Josh Kriegman, Elyse Steinberg and Eli Despres. The second season will also feature world-class therapist Dr. Orna Guralnik. Described as “raw and delicious” by the The New York Times, “addicting” by GQ and “compulsively watchable” by Jezebel, COUPLES THERAPY has received critical praise from press and viewers alike, and is currently airing on Fridays at 10 p.m. ET/PT.

COUPLES THERAPY unlocks a hidden world: other people’s relationships. Far from reality-show caricatures, this is true documentary filmmaking that brings viewers into the authentic and visceral experience of weekly therapy with four couples. Dr. Guralnik deftly guides the couples through the minefield of honest confrontation with each other and with themselves, revealing the real-life struggles – and extraordinary breakthroughs – typically hidden behind closed doors.

COUPLES THERAPY is produced by Edgeline Films for SHOWTIME. Kriegman, Steinberg and Despres serve as executive producers and directors. Carly Hugo and Matt Parker are producers, and Dan Savage is a consulting producer.”

What do you think? Are you a fan of Couples Therapy? Will you watch season two?

I am totally entranced with this series! Please do not cancel it. The therapist is amazing and I have nothing but admiration for the brave couples who are allowing their troubles and suffering to be aired on camera, but in so doing, they are helping millions of others by hearing the wise counseling of Dr. Guralnik. She is amazing!! I make sure to never miss an episode. Please do not cancel this series. Keep the episodes coming. They are helpful for couples everywhere.