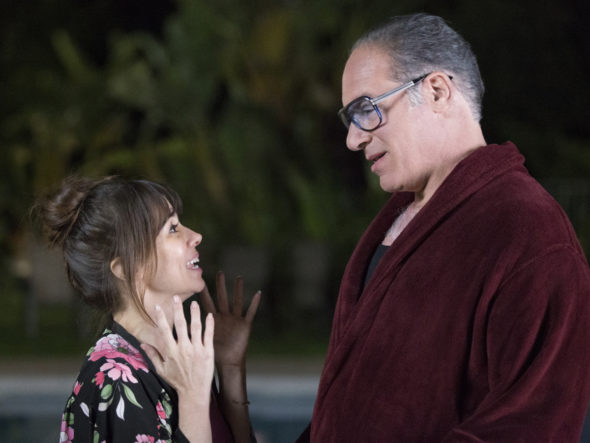 What’s in store for the Dice man? Has the Dice TV show been cancelled or renewed for a third season on Showtime? The television vulture is watching all the latest cancellation and renewal news, so this page is the place to track the status of Dice season three. Bookmark it, or subscribe for the latest updates. Remember, the television vulture is watching your shows. Are you?

A semi-autobiographical sitcom on the Showtime premium cable channel, Dice stars Andrew Dice Clay, Natasha Leggero, and Kevin Corrigan. The story centers on Dice, as he tries to relaunch his career, with the help of his girlfriend, Carmen (Leggero), and Milkshake (Corrigan), his less-than-bright buddy.

The second season of Dice averaged a 0.03 rating in the 18-49 demographic and 146,000 viewers. Compared to season one, that’s down by 57% and down by 24%, respectively. Learn how Dice stacks up against the other Showtime TV shows.

Dice premiered with truly terrible ratings and they haven’t gotten better. If it’s cheap enough, I could see Showtime renewing it but I’m still amazed it got a second season. Subscribe for free updates for any Dice cancellation or renewal news?
1/30/18 update: Showtime has cancelled Dice after two seasons. Details here.

What do you think? Were you hoping that the Dice TV show would be renewed for a third season? Are you sorry that Showtime has cancelled this TV series, instead?

this is a travesty. This show is actually a real work of art. All the episodes are brilliant and the plot development and character development are both very crafty. ‘Ego’ is one of my absolute favorites… Adrein Brody’s performance is simply profound, as is the writing. I’ve seen some shallow online criticism about the show by a few no nothings who think ADC the person is just some douchebag like the character he plays… they just don’t get it… saying it’s forced or something… Really? this show is forced in the same way Jerry Seinfeld’s character is forced…. Actually it’s… Read more »

THIS SHOW IS HILARIOUS!!!! I’m a huge fan and I don’t understand why it’s cancelled..BRING BACK THE DICE!!!!

Can’t understand why showtime would cancel Dice, they have nothing else interesting showing.
Dice was all I was looking forward to.
I’m done with showtime, to hell with them.