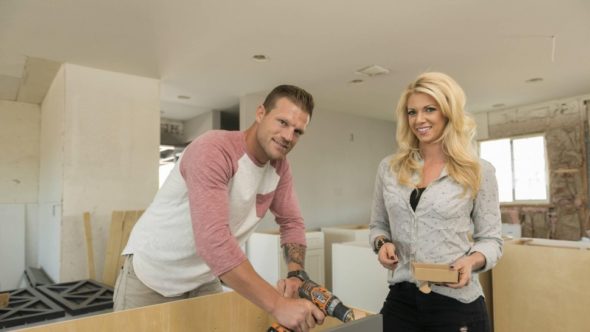 HGTV is stayin’ in Vegas. This week, the network announced they’ve renewed Flip or Flop Vegas for a third season.

A spin-off of Flip or Flop, the home improvement series features contractor and MMA fighter Bristol Marunde and his wife, real estate agent and designer Aubrey, as they showcase their home renovation and flipping skills.

Season three of Flip or Flop Vegas is slated to debut on HGTV in 2019.

New York [Sept. 20, 2018] HGTV has ordered a third season of its popular Sin City series, Flip or Flop Vegas. The network picked up 10 new episodes of the series, which follows Bristol Marunde, a licensed contractor and MMA fighter, and his wife Aubrey, a real estate agent and designer, as they purchase dilapidated desert homes and renovate them with dazzling Vegas style. The new season is slated to premiere in spring 2019.”

What do you think? Have you seen Flip or Flop Vegas? Are you glad it’s coming back?

Will this show ever come back? Love watching and enjoy the style for a Vegas home or condo.

LOVE, LOVE this show and AUBREY AND BRISTOL OF FLIP OR FLOP LAS VEGAS! Aubrey and Bristol’s decorating is over the top, love the classy look, design for interior and exterior of the projects! Informative on Pros and Cons of making a Profit; considering Comps of Area, Projected Sales Price, Reno Budget, working with Contractors and City Ordinances. The two have an Optimistic Outlook on Life, Marriage, Family and Home Projects!!! PLEASE, PLEASE CONTINUE “FLIP OR FLOP LAS VAGAS”!!!!!!‍‍‍

I absolutely love your LasVegas show, the only one with bling, just beautiful decorating and a beautiful couple in the show. Have watched all the old shows many times. Please bring them back.

I’m extremely glad that flip or flop Vegas is coming back. I don’t know why you ever took it off. Can’t wait to see
What Aubrey and Bristol have in store for us next

My favorite hgtv show. Have not seen but a couple of shows in 2019. Do not cancel!