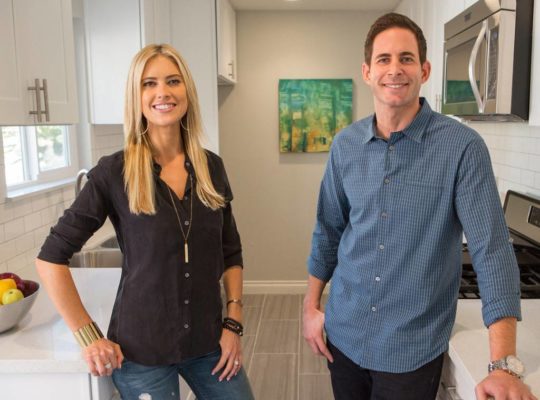 Christina and Tarek El Moussa may have divorced nearly two years ago but they’re still together in business. HGTV has renewed their Flip or Flop TV show for an eighth season of 15 episodes. Those are expected to premiere in Spring 2019 and will be the second season that the team has filmed since their divorce. Season seven is currently airing on Thursday nights on HGTV.

Here’s the press release about the Flip or Flop renewal:

New York [Aug. 8, 2018] With viewership of Flip or Flop up 18 percent over its prior season, HGTV has picked up 15 additional half-hour episodes of the popular series starring divorced couple Tarek and Christina El Moussa. To date, the seventh season, which finales on Thursday, Sept. 6, at 9 p.m. ET/PT, has attracted more than 15.2 million viewers. The most recent episode on Thursday, Aug. 2, ranked as the #1 cable show in the 9-9:30 p.m. timeslot among viewers P25-54. Flip or Flop will continue to spotlight Tarek and Christina as they buy dilapidated houses in Southern California, turn them into beautifully renovated homes and flip them for profit. With production underway, the new season is slated to premiere in Spring 2019.

“HGTV fans have followed Tarek and Christina through scores of house flips and supported their personal journey for years,” said Allison Page, president HGTV and Food Network. “We’re eager to see how they continue to run their flipping business, co-parent their children and start new chapters in their professional and personal lives.”

ABOUT HGTV
HGTV delivers the superstar experts, fascinating families, compelling renovations and stunning transformations that make all things home fun. America’s favorite way to get entertaining, relatable and inspirational home and lifestyle content, HGTV offers: a top 10 cable network that is distributed to more than 90 million U.S. households; a website, HGTV.com, that attracts an average of 9.7 million people each month; a social footprint of 16.8 million; HGTV Magazine, a monthly publication that reaches more than one million readers and exclusive collections of home-oriented products through the HGTV HOME(TM) consumer products line. Viewers can become fans of HGTV and interact with other home improvement enthusiasts through Facebook, Twitter, Pinterest and Instagram. HGTV is owned by Discovery, Inc., a global leader in real life entertainment whose portfolio also includes Discovery Channel, Food Network, TLC, Investigation Discovery, and OWN: Oprah Winfrey Network.

What do you think? Do you like the Flip or Flop TV show?

I love the show. It is one of my favorites and I like watching all the little idiosyncrisis they go through.

We used to watch the show all the time, but like “Mad About You” when the couple splits up, we quit watching

Tarek needs to leave design to Christina. He disagrees with most of her designs, I think because he’s bitter and just wants to push his weight around. Seems very spiteful to me… quite frankly I think he’s a jerk!!! Don’t enjoy the show as much as before their divorce. LET CHRISTINA DO WHAT SHE DOES BEST!! Tarek move on and stop being so difficult. Mostly stop trying to design because you suck at it!

SO GLAD FLIP OR FLOP WILL BE BACK NEXT YEAR. SORRY WE HAVE TO WAIT SO LONG. THANK YOU