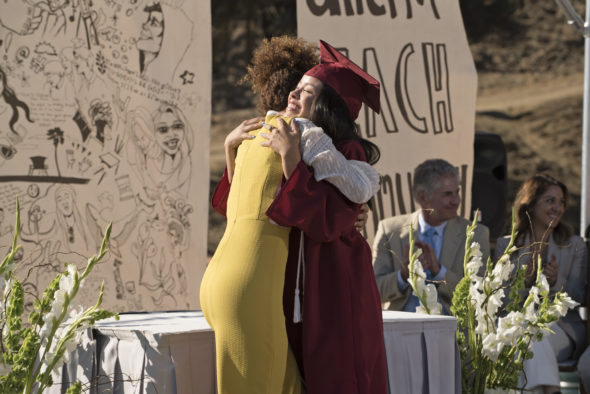 It’s almost time to say goodbye. On the heels of last night’s spring season five finale, Freeform has announced a three-night series finale for The Fosters TV show. Watch a preview, below. Back in January, Freeform confirmed the fifth season of The Fosters would be the final one, leaving it effectively cancelled. The Fosters three-part TV series finale will kick off on Freeform on Monday, June 4 at 8:00pm ET/PT and wrap up on Wednesday, June 6th, also at 8:00pm, with a supersized episode.

Learn more about The Fosters TV series finale from this freeform press release.

Freeform announced today that the GLAAD award-winning series will conclude with a special three-night series finale event that will premiere on Monday, June 4 at 8:00 p.m. and conclude on Wednesday, June 6 at 8:00 p.m. with a supersized episode.

Joining the cast of series regulars in the three-night event are six guest stars, including Abigail Cowen (“Wisdom of the Crowd”) who appeared in last night’s spring finale as Eliza, Brandon’s fiancé. Also joining as guest stars are Robert Gant (“Queer as Folk”), Susan Walters (“Teen Wolf”), Beau Mirchoff (“Awkward.”) and Spencer List (“The Bachelors”), who will play Eliza’s parents and brothers, respectively. Rounding out the guest stars is Dallas Young, who will play Corey, a charismatic foster child.

Winner of the Television Academy Honors Award and the GLAAD Media Award for Outstanding Drama Series, “The Fosters” is executive produced by Jennifer Lopez (“Shades of Blue,” “World of Dance”) and created by Bradley Bredeweg and Peter Paige (“Queer As Folk”), who also serve as executive producers and writers along with Joanna Johnson (“The Bold and the Beautiful,” “Hope & Faith”).

What do you think? Are you a fan of The Fosters TV series? Do you plan to check out the finale on Freeform?

They should not cancel The Fosters! Every show I’ve ever liked has been canceled, like Constantine!

How crazy that this series ended…. and ended on such an incomplete note?! I’m hopeful something is done about the, and with this 3-day finale, perhaps that is the case. Tsk tsk on the producers.

Loved this well made show that was forward thinking and up to date on current state of our society. This 61 yr old mother & grandmother enjoyed this very progressive and emotional show. Thanks again to the cast and crew…see you in June!

So sad to see this series end. It was the first in a long time that I looked forward to watching each week.