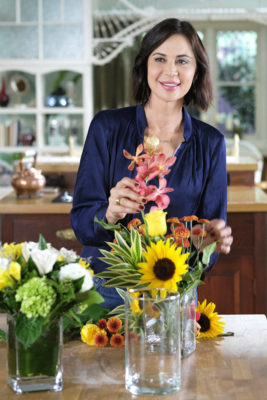 Season six of Good Witch premieres on Hallmark Channel on May 3rd at 9 p.m. ET/PT.

After receiving the perfect gift from Cassie (Catherine Bell) on the morning of their first wedding anniversary, Sam (James Denton) feels the pressure to reciprocate with a meaningful token of his love.  Martha (Catherine Disher) enters a bidding war with her nemesis Dotty (Paula Boudreau, “The Handmaid’s Tale”) for the new mayor’s mansion, which once belonged to a Davenport.  Stephanie (Kylee Evans) and her business partner butt heads about their food truck.  Abigail (Sarah Power) and Donovan (Marc Bendavid) receive “misfortunes” in their fortune cookies that lead to both an unexpected discovery and more information about their families’ curse.  Meanwhile, Cassie hosts a guest at Grey House who hides her mysterious intentions for visiting Middleton.

A chili cook-off brings out fierce competition in Middleton and Cassie (Catherine Bell) puts her taste buds to the test as one of the judges while flexing her magical intuition at Grey House.  When Sam (James Denton) finds himself without a crucial ingredient for his chili as the competition nears, he starts a chain of bartering that includes Martha (Catherine Disher), Stephanie (Kylee Evans) and Abigail (Sarah Power).  Martha receives unexpected competition in her once-uncontested run for re-election and may have to put her stubbornness aside to compromise with her potential political adversary.  Stephanie looks to lessons from her past to help a friend’s daughter with her friendship woes.  Abigail inadvertently reveals a secret about her father (Art Hindle, “Christmas in Montana”) when she meets his new girlfriend, and his deception makes her worry about her own relationship with Donovan (Marc Bendavid).  Meanwhile, Cassie unearths a time capsule that reveals information about her current Grey House guest.”

What do you think? Are you a fan of Good Witch? Are you excited for the new season?

Love, love, love Bell, Denton and all the support cast! The writing is colorful, playful, enchanting, and sometimes surprising!

Such a big fan of the show! Have purchased all the shows and Seasons on DVD! Cannot wait for the Return of The Good Witch Season 6.
I love the cast, warmth, good messages and chemistry between the cast members. Catherine Bell is so perfect as the Good Witch in every season, and James Denton is a keeper as her husband.

I thoroughly enjoy Goodrich as a matter of fact I own all of the movies and the DVDs. It’s one of those shows you watch and you come away each week feeling better than when you started watching it

Love this program. Have watched more than once the goodvwitch movies also.

I love it! I can’t wait for it to return!

I’m excited to see The Good Witch to return!!! 1 of my absolute favorites!!!

I am really excited for the new season of Good Witch. I look forward to it every year. I love Catherine Bell and the cast had great chemistry on the show.

Yay – I love the show but missed season 6 altogether and can’t seem to find it, I also want to see the original movie

Delighted, look forward to viewing the series. Will I be able to get it on Netflix?

I have been checking off and on Catherine Bell is one of my .I watched her in army wives.

We are very glad Good Witch is coming back for season 6! Hope it will continue for many more seasons.