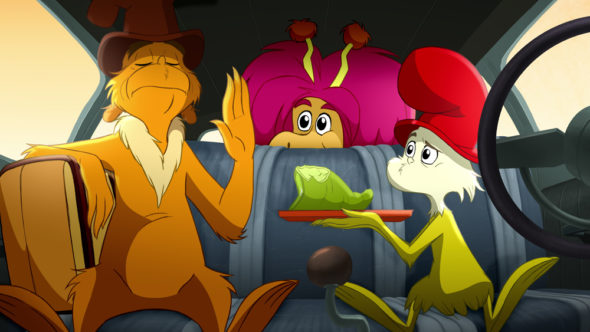 Are you ready for another helping of Green Eggs and Ham? Netflix just announced they’ve ordered a second season of the animated TV show.

Based on the book by Dr. Seuss, the series “expands the story of the delicacy’s persistent champion Sam I Am and picky eater Guy Am I as they go on a road trip to rescue an endangered creature from a zoo, learning about hope, trust and friendship along the way.” The voice cast includes Michael Douglas, Adam DeVine, Eddie Izzard, Diane Keaton, and Keegan-Michael Key.

Netflix has not yet announced a premiere date for season two of Green Eggs and Ham, but you can see the announcement below:

Save room for Season 2 because we’ve ordered more!

Green Eggs and Ham: The Second Serving will follow Sam and Guy around the world and outside their comfort zones as they get caught between two sides of a delicious conflict! pic.twitter.com/pTF9AEgzkt

What do you think? Have you seen Green Eggs and Ham? Are you glad there’ll be a second season?