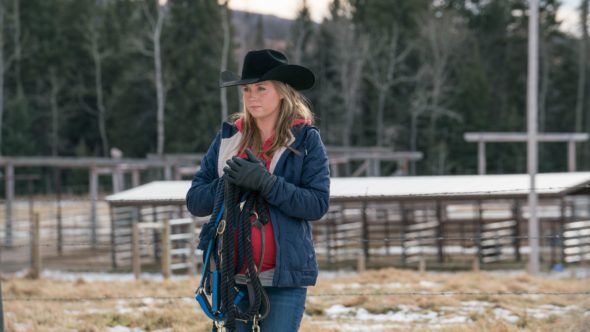 Can Jack, Amy, and Lou keep the ranch going? Has the Heartland TV show been cancelled or renewed for an 11th season on UP? The television vulture is watching all the latest TV cancellation and renewal news, so this page is the place to track the status of Heartland season 11. Bookmark it, or subscribe for the latest updates. Remember, the television vulture is watching your shows. Are you?

A Canadian family drama on the UP cable channel, Heartland airs on CBC in Canada. The cast includes Amber Marshall, Graham Wardle, Michelle Morgan, Chris Potter, Alisha Newton, Shaun Johnston, Jessica Steen, Kerry James, Gabriel Hogan, and Nathaniel Arcand. The scripted TV show centers on the tightly-knit Bartlett-Fleming family of Canadian ranchers in Hudson, Alberta. It follows their challenges and adventures on the Heartland ranch, where they treat horses with special needs, due to neglect, or worse. Along with rehabilitation, they also seek new homes for these majestic animals.

Because Heartland is first and foremost a CBC TV show, its Canadian ratings are largely responsible for whether it is cancelled or renewed. Although we don’t track the ratings in Canada, I do keep an eye on cancellation and renewal news from our neighbor to the north. Because CBC already renewed its Heartland TV show for an 11th season, back in March 2017, it seems likely UP will follow suit. I’ll update this page as news breaks, so subscribe for free updates regarding any Heartland cancellation and renewal news.
2/14/18 update: UPtv has announced that they’ve picked up season 11 of Heartland. Details here.

What do you think? Are you glad that season 11 of the Heartland TV show will air on UP? How would you feel if they stopped airing this TV series, instead?

Please have it on UP I love this shows

Love this series…. my daughter wants to be just like Amy… please don’t cancel it

Are you in the United States

Please do not cancel Heartland!!! This is my favorite series and it is so real to life! I have come to love the characters and would be devastated if it were to be cancelled. Even my dog loves it! She hears the music and comes running to watch it with me on tv. She loves all the animals and has learned the music when she hears it.

Please continue Season 11 of Heartland. This is the best family television show on TV and a show everyone needs to see. We have been watching it since it came on UPTV and look forward to it every week. We have friends that have started watching it and love it. Please, keep it on.

I would love to see this family show continue

Please continue Season 11 of Heartland. This is one of the best family series ever, and the characters feel like friends. It’s something my family looks forward to each week, and we always feel sad when a season draws to a close.

If you don’t get The UP channel, The CW picked up the show at season 10, so hopefully, one – or both – will renew season 11! And if you need to catch up, Netflix has every season available and always *eventually* gets the latest season. Then, there’s Amazon, where you can subscribe to The UP Channel and see the latest episodes as they air; I’m pretty sure that you can subscribe to The CW, also. And, of course, with Netflix and Amazon, you can watch commercial-free, anytime, from anywhere. And, finally, on Direct TV, you can usually watch the… Read more »

I believe this show should be renewed- there are too few shows like this one
that has such a positive message- messages that we all need to hear and see!
Please UP TV renew Heartland for another season! Judy from California

Please keep the show on air for the 11th season!!! i love this show so much! It’s so cute and great! I love the cast and the storyline! I want to see what happens next! Please PLEASE PLEASE!!!! -From Kentucky!!

UP channel keep Heartland tv show on air for the 11th season and i do love the show. Please keep the show on air. From Arizona.

Love Heartland. Wish UP TV had it on all the time. I know it was renewed & we are a season behind here, but still looking forward to what we get. The cast & storylines are great, clean, family fare.

Please renew “Heartland” for Season 11 and more. This is a great family show.

Best show ever. Binged on Netflex. PLEASE DO NOT CANCEL.