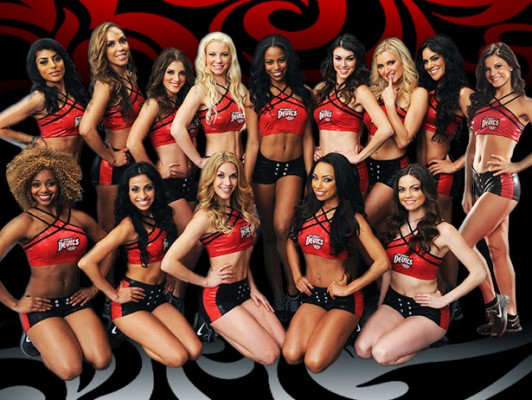 TV show description:
This dramatic series follows the lives and loves of the Los Angeles Devil Girls, the premiere dance team in the world of professional basketball.

Ahsha Hayes (Taylour Paige) is a sheltered and talented young woman who joins the team against the wishes of her mother Sloane (Kimberly Elise), a strong-willed former Devil Girl who knows the treacherous, tempting world all too well. Furious when Ahsha blows off a job interview to audition for the Devil Girls, Sloane is resigned to Ahsha’s dream and winds up supporting her as she makes her final bid to be on the team.

Olivia Vincent (Charlotte Ross) is the shrewd squad manager. She wasn’t the best dancer, but was crafty enough to seize an opportunity to turn the Devil Girls into a multi-million dollar empire. Married to a former Devil, it’s the one personal relationship that hasn’t suffered thanks to her machinations to get to the top. The friendship that suffered the most was the one she had with Sloane, who’s return stirs up old feelings — and old wounds.

Jelena Howard (Logan Browning) is the current captain and unequivocal star of the Devil Girls. She’s tough, saavy, and a bully bent on intimidating or outright hurting anyone who gets in the way of her position in the limelight. Very quickly, she’s threatened by the obvious star quality of newcomer Ahsha.

Pete Davenport (Dean Cain) is the former All-Star who’s come back to coach his old team. Walking intimidation, fried by life, with a low tolerance for annoyance, struggling with the aftermath of a painful divorce, Davenport is the brand new coach for the Devils basketball team, and he makes no bones about the fact that he hates being a judge at the Devil Girls tryouts. He remembers Sloane from her days as a Devil, when they were both younger and got into lots of trouble together.

Kyle Hart (Katherine Bailess) is a stripper who auditions for the Devil Girls and unabashedly uses her considerable sexual wiles to get what she wants. She’s bright, observant, and not afraid to fight for what she wants.

Raquel Saldana (Valery Ortiz) is as emotional as a telenovela heroine and twice as drama-plagued. Still sweet and friendly, Raquel is a current Devil Girl whose life is complicated by her 4 year old son, Miguel, and the fact that Miguel’s dad, her ex, is a deadbeat bully who’s also the manager of half the players on the Devils.

Derek Roman (McKinley Freeman) is one of the ringleader/star basketball players and he’s mischievous, handsome, and sexy as hell. He comes in with a few other players to check out the girls auditioning for the Devil Girls and immediately takes a fancy to Ahsha and can’t deny that there’s definitely a spark between them.

German Vega (Jonathan “Lil J” McDaniel) is sweet, soulful, sexy, and confident. As Ahsha’s boyfriend, he knows what he has in her. A high school gym teacher who once had dreams of a pro-basketball career, German is supportive of Ahsha’s decision to chuck her bank job interview. He supports her through her entire journey, but it gets harder and harder the more she’s lured into a seedier and seedier world.

Terrence Wall (Robert Christopher Riley) acts like the star player that he is. He and Jelena have a hot and heavy relationship, making them king and queen of this world.

Oscar Kincade (Don Stark) is the owner of the Devils. Larger than life, Oscar represents everything treacherous with this world. Greed, misogyny, and the capability of using anyone and anything to get what he wants. He thoroughly enjoys watching the Devil Girls auditions and isn’t opposed to offering the random girl an opportunity to get ahead.

Series Finale:
Episode #41 — Final Seconds
As the Devils gear up to take on Miami, their biggest opponent, personal conflicts come to a head and Devils Nation will never be the same again.
First aired: August 28, 2018.

What do you think? Do you like the Hit the Floor TV series? Do you think it should have been cancelled or renewed for a fifth season?

Just when I get into a night time soap it is taken away, I just hope it returns. I really would like to know whose body they found, and what is going to happen with the love affairs.

please renew the series hit the floor its very enjoyable and entertaining.

That was one of the best shows on TV. Please renew

Just when i was falling in love you took it off.
Please renew it for us would like to see what happens
with Derek and his ***** of a gal.
thanks man.

I love this show.. Please give us more…..

I watch it every week, there are twist every week that keeps us on edge, love it.

Please renew for a second season

the show keeps you thinking , it is wonderful please renew dont know what i would do without this show.

hit the floor is awesome and so many people agree where i stay . this is actually the best show that been out in a while.

LOVE the show!! Should def. be renewed.

The one series that is not a reality show. It is quite entertaining.