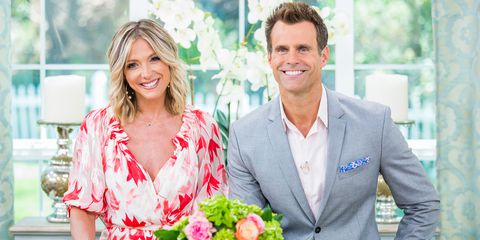 Read more info about the renewal from Hallmark Channel below:

“‘Home & Family’ continues to grow its audience and has delivered double-digit increases in the demo and households all season long, making the decision to renew it easy for us,” said Michelle Vicary, Executive Vice President, Programming & Network Publicity, Crown Media Family Networks. “We are proud to be the only non-news or sports cable network to offer our viewers original programming during the daytime that not only entertains but enhances their lives as well.”

Update: Home & Family is “taking a little break” in August and new episodes are airing on Fridays only during this month. The show will be back to its regular weekday schedule in September. Season eight kicks off on September 3rd.

What do you think? Do you watch Home & Family? Are you glad it’s coming back?

I look forward to seeing home & fam. Even if it’s reruns. But I’m confused I thought it started new season 8 had started- but now I’m seeing reruns again what’s going on… When will da new shows come back. I luv u guys. Never stop. Rosemary.

I hope Home and Family will come on tv for years. I never miss watching the show every day and if I can not watch if record so I will not miss anything. Please do not stop this show

Love this program! So glad it will be returning!

Total disappointment. You have ruined what was once a great morning show. I check back occasionally to see if you’ve fixed things, but end up changing to my new favorite programing after about 5 minutes. Don’t know how you have any ratings enough to keep this format going with the hosts you have. The are so phony with a badly written dialog. They ate their own best fans. Hallmark, you really messed up.

H&F Show has truly turned into a Gong Show….not at all what I started watching and enjoying years ago. Debbie & Cameron: stop touching each other (or get a room) and please, please STOP talking over your guests. The guests are why I look at the show, not the 2 of you.

Home and Family is the best TV show on daytime TV. All of it is Great. Keep it going!

I love this show. I was afraid it was gone for good when there were no shows in August. It is about the only show worth watching during the day.

I LOVELOVELOVE! H&F … hopefully no more surprise firings (shame on Hallmark for Mark) Cameron is proving to be an alright substitute- and I mean that in the nicest way! Keep doing whatchoo do, Debbie- and love to the rest of the gang!!Congrats on another great season!!

So happy the show is going to air today. Look forward to watching it.
I was going to do errands today I found out the first show is today I’m staying home forget the errands Love everything about the show I think it’s the best show on TV.

With all the “junk food TV” out there I’m thankful Home and Family has continued It is an example of one of the few shows that you don’t have to worry about inappropriate topics or language for family viewing. I DVR it. It is entertaining and informative. We enjoy all of the cast members too. Good job Hallmark!

I love the show, all the people on it! It is a true family sharing ideas, projects and so much more. When I am home I try to watch it. Love the people, ideas, and makes my morning a fun one! Thanks and do not go away Ok! We need people like you! Thank you for the show Georgia Migliorisi

Since I submitted my post, I have read some of the comments. Debbie and Cameron make wonderful hosts, and I cannot for the life of me know why people have to complain. Debbie is smart, family minded, cute, compassionate, and on and on. She is very genuine! When compared to newswomen, women hosts to shows, women in politics, she seems like an angel. As one woman said, “if you can”t say something nice, don’t say anything at all.” Home and Family was a life-giver and saver to me when I was recovering from multiple surgeries. Thank you, God for Home… Read more »

I am more than delighted to hear that ‘Home and Family’ is returning. I have been heart-sick that it has been off the air, and I must confess that I would turn the TV on to check, then change channels. I have been watching the Hallmark Channel very little, since I have seen most of the movies several times. Of course, I love the new movies and am a regular fan of the series you produce such as “When Calls the Heart.” I am a “mature chick” who has had numerous surgeries in the last few years, and Home and… Read more »