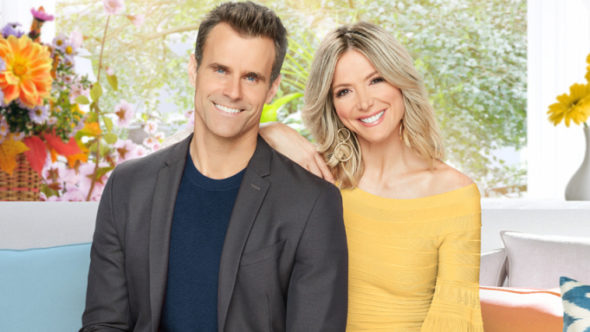 The recipes, lifestyle tips, and celebrity interviews will continue (eventually) on Hallmark. The cable channel has renewed the daytime lifestyle series Home & Family for a ninth season with Debbie Matenopoulos and Cameron Mathison as hosts.

Debuting in April 1996 as The Home and Family Show, this Hallmark Channel series was initially hosted by Cristina Ferrare, Michael Burger, and Chuck Woolery. It ran until August 1998. Home & Family was revived in 2012 and has been a staple of Hallmark’s schedule ever since. Hosts Mark Steines and Paige Davis kicked off the revival but Davis left after six weeks, replaced by Ferrare. Ferrare was dropped from the program in 2016 and was replaced by Matenopoulos. Steines was replaced in 2018 with Mathison taking his place.

According to the channel’s site, the last original eighth season episode aired March 13th, prior to production being shut down due to the COVID-19 pandemic. The hosts and contributors have been filming segments at home and they’ve been posted to Hallmark’s site.

What do you think? Are you a regular viewer of Home & Family on Hallmark Channel? Are you looking forward to the return of new in-studio episodes?

I like the Home & Family show. Currently the 3-day show is some help. The Movies are not the quality previous years. Too much alcohol!

Can they have virtual programs, filming their interviews from home, as other tv shows are doing?

I haven’t watched the show since Hallmark fired Christina. Never have liked Debbie,not even when she was on The View & I stopped watching The View more than 20 years ago! That show should have not been renewed after the first season!!!