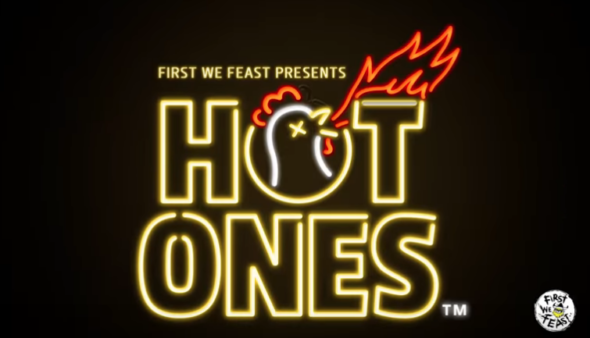 Hot Ones is coming to the small screen. truTV just announced they’ve ordered a new TV show called Hot Ones: The Game Show.

Based on the popular YouTube series, will pit contestants against each other as they are “quizzed on pop-culture trivia while chowing down on wings slathered in sauces meant to bring on the sweat.” Sean Evans will host.

truTV has ordered 20 episodes of Hot Ones: The Game Show. You can read more info below:

LOS ANGELES – November 1, 2019 – truTV is bringing the heat with its fiery new series, Hot Ones: The Game Show, based on the wildly successful web talk series created and produced by Complex Networks’ brand, First We Feast. Host Sean Evans will dare contestants to put their money where their mouth is and enter the “Pepperdome,” to compete for $25,000 in a battle of wits and gastro-intestinal fortitude. Hot Ones: The Game Show will air on truTV as part of a Hot Ones hour each week, with one episode of the game show followed by one episode of the original First We Feast digital talk show, also hosted by Evans. truTV has licensed episodes of the massively popular series featuring A-list celebrities that became a phenomenon with more than a billion views over its 10 seasons.

In each episode of Hot Ones: The Game Show, two teams of two face three rounds, banking as much cash as they can to compete for the grand prize. Contestants will be quizzed on pop-culture trivia while chowing down on wings slathered in sauces meant to bring on the sweat. The teams will have their mental and visual skills tested through all three rounds as the burn sets in and the contestants become completely disoriented.

The team with the most cash at the end of all three rounds moves on to the finale, The Ring of Fire. Five flaming rings stand between the teammates and the cash, and they must work together to solve a password game, with each successful clue extinguishing another ring of flames as they get closer and closer to the money – and the antidote for their burning mouths. If the teammates fight through the pain and guess five correct passwords in 90 seconds, they’ll win $25,000 in cash and claim their places as Hot Ones legends!

“Fans around the world have tried creating their own versions of the Hot Ones challenge for years, but there’s nothing better than the real thing,” said Brett Weitz, general manager TBS, TNT, and truTV. “We’re going to up the stakes, and take this show to a whole new level of heat.”

“With Hot Ones, we were able to redefine the celebrity interview with the addition of violently hot chicken wings,” said Chris Schonberger, General Manager of First We Feast. “Now, we’re excited to team up with the pros at truTV and DIGA to create a great game show format, supercharged with the spice and offbeat sensibility of the original series.”

“As a longtime fan of Hot Ones, I was thrilled to get to work with Complex and the great team at Warner Media, including my friend and colleague Michael Bloom, to bring this next evolution of the concept to truTV,” said Tony DiSanto, Executive Producer and President of DIGA Studios. “It combines raucous and hilarious gameplay with the core DNA of over-the-top spectacle that made the original Hot Ones such a cultural phenomenon. We love to adapt unique IP across a variety of genres including Game, which is a rapidly growing part of our slate, so this is right on target for us… yet sadly, I wouldn’t last three seconds in this game!”

truTV has ordered 20 episodes of the half-hour series, which goes into production later this fall with a premiere date planned for early next year.

What do you think? Are you a fan of Hot Ones? Will you watch the truTV series?