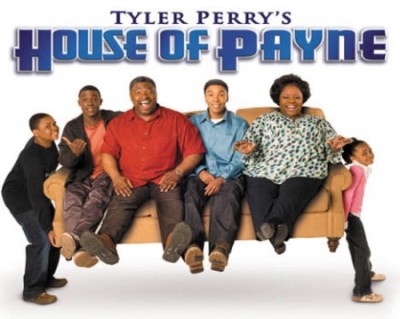 After 254 episodes and eight seasons, this evening marks the end of Tyler Perry’s House of Payne TV series on TBS.

In April 2011, the cable channel announced that they were ending the venerable sitcom, in part to make way for Tyler Perry’s For Better or Worse. At that time, we understood the final episode total for House of Payne to be 220 installments.

In late September 2011, Perry posted on his Facebook page that TBS had ordered even more episodes. In December, the cast and crew had a wrap party that celebrated the completion of 254 episodes. We now know that was the last.

The series finale of House of Payne is called “All’s Well” and it caps off a very successful run. In fact, it’s the longest-running sitcom with a predominently African-American cast — surpassing The Cosby Show (201 episodes), Family Matters (215 installments), and The Jeffersons (253 episodes).

Still, it can be hard to say goodbye, even after a very long run. What do you think? Are you sorry to see House of Payne go? Should TBS have ended it? What will you miss?

That was the most disappointing, awful, build-up-just-to-let-you-down so-called series finale I have ever seen. What a waste of my freaking time. Ugh. Disgusted.

Hate the way that ended

I am VERY DISAPPOINTED in the series finale, this is not a finale,
what happened to Calvin and Miranda? Where is Jazy and Malik?
This needed AT THE LEAST 20 more episodes.
I hope TP and TBS reconsiders and does a few more or a spin off for some closure.

Very sad… Love that show !!!! Wishing that it ended better !!! Hope tbs and Tyler perry can get it back in the air PRONTO !

Im really up set that the house of payne is going off the air that was my joy on firday nights.to be replace by for better are worse witch is’nt that funny.bring house of payne back it did’nt end right.

They cant just end the show this way!! Not fair to the viewers! Also like The Critic had mentioned, they should of had ALL the cast members in it if this is truly the last episode.

Very disappointed that tonight was the the last of the shows. Really wish to know what happens with Kalvin. Also would have liked an update on everyone before it ended for good.

I think house of payne should have a few more episodes too. Or maybe a spinoff show with Calvin and Miranda.

I didn’t get it. Why would they leave it hanging like that? Hoping they’ll realize there was no closure and add at least one more episode. Very disappointed.

It was replaced by a really, really bad show. It should be called “Can’t Get Any Worse”.

Everyone has grown to love Tyler Perry’s House of Payne;it enetertains all viewers more or less and leaves us tuning in for more each time. The show was a success through 254 episodes, and im certain that it will be a hit with many more..In all honesty House of Payne is an outstanding sitcom and it is unfair to simply take that away from the viewers, especially ending the series with such an emotional ending that left everyone in suspense..Im sure everyone can agree that we need another season or two, atleast to discover what will happen with Miranda and… Read more »

[…] episode marks the end of Tyler Perry’s House of Payne. With episode 254, House of Payne surpasses The Jeffersons as the longest-running sitcom […]

I had a problem with the would-be “series finale” of HoP. 2 actually. First of all, they did not wrap up anything. The second of the two episodes ends with an abrupt cliffhanger. Second of all, Jasmine and Malik weren’t even in them. This needs at least a few more episodes. And besides, ending it in favor of “For Better or Worse” does no favors for anyone because that show is not very funny at all. HoP was no classic, but it’s better than FBOW.

I definitely agree, House of Payne is by far more enjoyed..