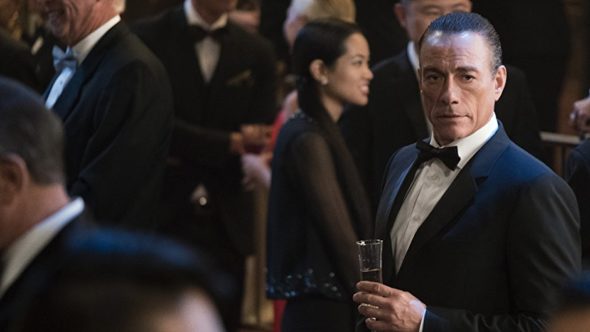 An Amazon scripted spy comedy, Jean-Claude Van Johnson stars Jean-Claude Van Damme, Kat Foster, Moises Arias, Bar Paly, Tim Peper, Phylicia Rashad, Deren Tadlock, Winston James Francis, Filip Van Damme, and Carlo Rota. Although to the world, Jean-Claude Van Damme (Van Damme) is a movie star and martial arts expert, he’s actually a secret agent. Using the alias, “Johnson,” he was once the world’s most daunting spy. Now that he is retired, he feels at loose ends in Hollywood. One day though, upon running into an old flame, Van Damme finds himself drawn back into the world of espionage. Now he must confront the most formidable foe he has ever faced — himself.

Unless they decide to release viewership statistics, it is difficult to predict whether Amazon will cancel or renew Jean-Claude Van Johnson for season two. Flying blind, I think it will get another season, based on Van Damme’s star power. Since that’s just a guess though, I’ll keep an eye on the trades and update this page with breaking developments. Subscribe for free alerts on Jean-Claude Van Johnson cancellation or renewal news.

1/17/18 update: Amazon has cancelled Jean-Claude Van Johnson, so there will be no season two. Details here.

What do you think? Did you hope the Jean-Claude Van Johnson TV show would be renewed for a second season? How do you feel now that Amazon cancelled this TV series, instead?

Bring on Season 2! Such a fun show! Loved it all…clever witty and action packed! Foolish not to renew again…what is wrong with programming these days?

This is an awesome show! It had great character development, truly funny dry humor, engaging action, a love story, and the best actor of all time, JCVD. I hope someone else picks it up.

As good as Goliath
And u brought it back
Wtf

I love the concept, pure entertainment… In a world saturated with pretentious and boring series, the managers of Amazon proved to understand nothing canceling the second season… a second season with a cameo of Bruce Willis in his Looper character it would have been an epic moment. Bad bad bad decision, Amazon

PLEASE BRING IT BACK!!!!!!!!!!!!!!!!!PLEASE!!!!!!!!!this show is the greatest u gotta give it a chance just like any other show for example look at Smallville people said the samething doubted it and the brought it back for 10 seasons and family Guy and so on and so on u gotta give this show a chance you only get nothing but good comments about this show so everyone knows it’ll do good make money and give people good entertainment so please reconsider!and bring it back

F’ing bullsh*t!! I don’t watch TV programs, series, or short movies, but I LOVED Jean Claude van Johnson. What the hell is wrong with you people??? Please please please reconsider!

One of the best new shows on Amazon. Give us a season 2, don’t cancel it like a month after season one came out, you aren’t really giving it a chance to succeed.

Watched the show for the first time with my wife who along with myself found this series very enjoyable, if audience knew of the show I’m sure many more people would argue its cancelation. I have amazon TV but never remember to turn it on, advertising of this show would absolutely make this a number one show. Amazon try another season and do more to spread the good reviews. Watched every episode and wanted more!

Love the show, having grown up in Brussels, I have a soft spot for Jean-Claude even though i was never a big fan of his films. However, I love the concept of the show and what a good sport he is in making fun of himself and past movie career. I hope Amazon brings it back for a second season, it’s a really nice change from the comic book shows that have taken over the action genre.

I laughed and it was a lot of fun – I am looking forward to the next season.
TimeCop is way better than Looper –

JCVD can take the p… Out of himself better than the rest of the 80s / 90s stars. This is in the so bad it’s great camp like so many of his later films. I love it and definitely think it’s got legs to carry on

Mike,
What a great review, you really nailed it.
I just hope more people take the time to let Amazon know how much they loved the show. It would be sad not to see a second season.

Yes I liked the series it’s pretty funny and good humor and action, hope it doesn’t get cancelled

Omg, please JC, do not cancel this show. I love it!

I enjoyed it a lot and think it should be renewed- loved the comedy added into show also! Hope he has an emu farm someday