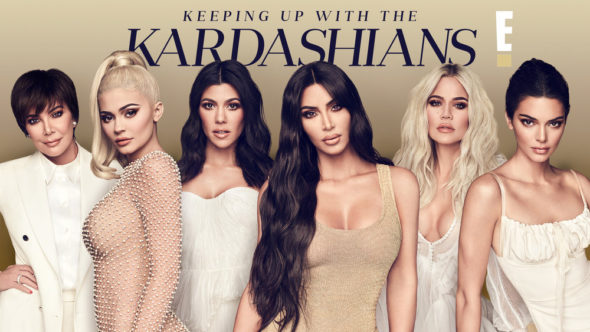 The end is coming for the Keeping Up with the Kardashians TV show. E! has announced that the unscripted TV series is ending with the 20th season which will air sometime in 2021. Before that happens, season 19 will debut on Thursday, Sept. 17th.

Here’s the announcement about the final season of Keeping Up with the Kardashians:

Listen up, Dolls: season 20 will mark the final season of Keeping Up With the Kardashians. The Kardashian-Jenner family and E! announced today, Tuesday, Sept. 8, that the iconic series will return for season 19 on Thursday, Sept. 17 followed by one last season (season 20) in 2021.

“It is with heavy hearts that we say goodbye to Keeping Up with the Kardashians. After what will be 14 years, 20 seasons, hundreds of episodes and several spin-off shows, we’ve decided as a family to end this very special journey,” the family shared on social media. “We are beyond grateful to all of you who’ve watched us for all of these years—through the good times, the bad times, the happiness, the tears, and the many relationships and children. We’ll forever cherish the wonderful memories and countless people we’ve met along the way.

“Thank you to the thousands of individuals and businesses that have been a part of this experience and most importantly, a very special thank you to Ryan Seacrest for believing in us, E! for being our partner, and our production team at Bunim/Murray who’ve spent countless hours filming our lives. Our last season will air early next year in 2021. We love you!”

The E! networks added in a statement, “E! has been the home and extended family to the Kardashian-Jenners for what will be 14 years, featuring the lives of this empowering family. Along with all of you, we have enjoyed following the intimate moments the family so bravely shared by letting us into their daily lives. While it has been an absolute privilege and we will miss them wholeheartedly, we respect the family’s decision to live their lives without our cameras. It is not our final goodbye yet, we are excited to have the new season of Keeping Up with the Kardashians launching on September 17 with the final season airing in 2021. We thank the entire extended family and our production partners, Bunim Murray and Ryan Seacrest Productions for embarking on this global phenomenon together.”

There’s lots more exciting moments to come when KUWTK returns Sept. 17 at 8 p.m.! And get ready for the final, fabulous season coming in 2021.

In the meantime, celebrate the most iconic Keeping Up With the Kardashians moments in the photo gallery below ahead of the season 19 premiere.

Keeping Up With the Kardashians returns Thursday, Sept. 17 at 8 p.m., only on E!

What do you think? Do you enjoy the Keeping Up with the Kardashians TV series? Are you sorry that this E! TV series is coming to an end?

I will miss this show. Thank you ti the family for sharing with us. You will be missed

OMG FINALLY!!! The most self serving / millennial crap hour of TV is finally going back to the junk yard where it belongs

Omg I cant believe it. But watching courtney lately and Rob I knew something was going to happen. They didnt want to do this anymore.
I understand and wish only the best for you all. I will miss seeing you all and thank you for sharing your life.
Khloe, I will miss you the most, but sure am going to miss the show.
Tammy

Omg.. i cant believe my ears I love Keeping up with Kards.. my husband got me hooked on it years ago.. Really hate to here this i really think they need their own channel cuz i can watch it over an over again! But after all these years now The girls as well as Rob have their own lil familys so thats what matters now!! Hate to c them go but its been a long time an sooo many ups an downs so i totally understand y they r calling it quits☹… Much Love to All of Yall❤