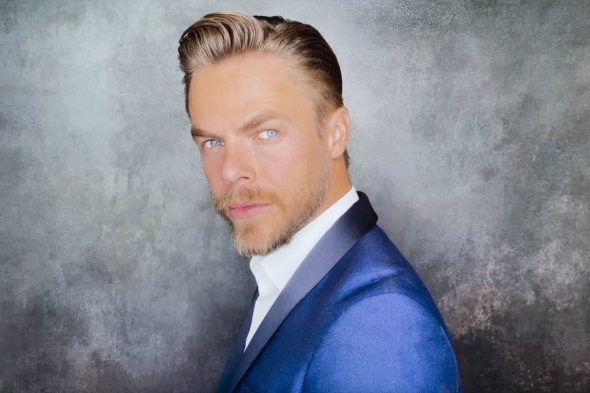 There’s another change coming to the ballroom. Dancer Derek Hough is returning to the Dancing with the Stars TV show for the upcoming 29th season. However, he’ll be one of the judges this time around, stepping in for regular judge Len Goodman on the ABC series. Goodman will still be participating remotely. The new season kicks off on Monday, September 14th, at 8:00 PM.

Emmy(R) Award winner and six-time Mirrorball champion dancer Derek Hough joins “Dancing with the Stars” in a new capacity as a judge when the show kicks off its new season live on MONDAY, SEPT. 14 (8:00-10:00 p.m. EDT), on ABC.

Derek Hough said on his return, “This show has been and will always be incredibly special to me. Coming back feels like coming home and I couldn’t be more excited to be back in the ballroom.”

Hough joins Carrie Ann Inaba and Bruno Tonioli at the judges table in the ballroom. Meanwhile, in light of current circumstances, Len Goodman will be unable to judge this season live in the ballroom, though he will still be a part of the show in a different capacity sharing his ballroom expertise from the UK.

About Derek Hough
A multitalented entertainer and New York Times bestselling author, Derek Hough started dancing in his hometown of Salt Lake City, Utah, at age 11. Just one year later, he moved to London to live and train with the top dance coaches in the world and attend the prestigious Italia Conti performing arts school where he studied theater, music and dance.

With celebrity partners on “Dancing with the Stars” that included Brooke Burke, Jennie Garth, Ricki Lake, Nicole Scherzinger, Jennifer Grey, Kellie Pickler, Amber Riley, Amy Purdy and Bindi Irwin, Hough is best known for his innovation and daring choreography on the show. To date, Hough is the winningest professional dancer in the franchise’s history with a total of six wins.

Hough appeared in this year’s “The Disney Family Singalong” specials.

A two-time Emmy Award winner and nine-time Emmy nominee, Hough has also appeared in film, television and stage projects as an actor. He made his feature film debut for director Duane Adler and producer Robert Cort in the feature film “Make Your Move” and had a recurring role on the ABC series “Nashville.” His stage performances include Radio City Music Hall’s “Spring Spectacular,” co-starring alongside Tony Award(R)-winning Laura Benanti, as well as the critically acclaimed production of “Footloose,” where he starred as the male lead in London’s West End.

In May 2017, Hough joined Jennifer Lopez and Ne-Yo at the judges table for the NBC series “World of Dance.” And in December 2016, Hough starred with Jennifer Hudson, Ariana Grande, Martin Short and Harvey Fierstein in NBC’s “Hairspray Live!”

Hough can also add bestselling author to his list of credits. His memoir “Taking the Lead; Lessons from a Life in Motion” hit stands in August 2014 and was rapidly named to the prestigious New York Times Best Seller list during two nonconsecutive time periods.

Next year, fans around the world will head to Las Vegas, the entertainment capital of the world, to catch Hough in “Derek Hough: No Limit.” This highly anticipated residency for Caesars Entertainment at the Flamingo Las Vegas debuts in 2021.

About ABC Entertainment
ABC Entertainment airs compelling programming across all day parts, including “Grey’s Anatomy,” the longest-running medical drama in primetime television; riveting dramas “The Good Doctor,” “A Million Little Things” and “Station 19”; trailblazing comedy favorites “American Housewife,” “black-ish,” “The Conners,” “The Goldbergs” and “mixed-ish”; the popular “Summer Fun & Games” programming block, including “Celebrity Family Feud,” “Holey Moley,” “Match Game,” “Press Your Luck” and “To Tell the Truth”; star-making sensation “American Idol”; reality phenomenon “Shark Tank”; “The Bachelor” franchise; long-running hits “Dancing with the Stars” and “America’s Funniest Home Videos”; “General Hospital,” which has aired for more than 55 years on the network; and late-night talk show “Jimmy Kimmel Live!”; as well as the critically acclaimed, Emmy(R) Award-winning special “Live in Front of a Studio Audience: Norman Lear’s ‘All in the Family’ and ‘The Jeffersons.'” The network also boasts some of television’s most prestigious awards shows, including “The Oscars(R),” “The CMA Awards” and the “American Music Awards.”   ABC programming can also be viewed on demand and on Hulu.

About BBC Studios
BBC Studios, a global content company with British creativity at its heart, is a commercial subsidiary of the BBC. Formed in Apr 2018 by the merger of BBC Worldwide and BBC Studios, it spans content financing, development, production, sales, branded services, and ancillaries. BBC Studios’ award-winning British programs are internationally recognized across a broad range of genres and specialties. It has offices in 22 markets globally, including seven production bases in the UK and production bases and partnerships in a further nine countries around the world. The company, which makes over 2,500 hours of content a year, is a champion for British creativity around the world and a committed partner for the UK’s independent sector. In the Americas, BBC Studios operates two production units – one in Los Angeles, responsible for ratings juggernaut and Emmy(R)-nominated Dancing with the Stars and multi-award-winning Life Below Zero, and the other in Brazil, where local productions Dancing Brasil and Bake Off Brasil have become breakout hits. The company manages joint venture relationships with AMC Networks for flagship channel BBC AMERICA (U.S.) – home of original series Killing Eve and global brands Dynasties, Doctor Who, and Top Gear – and with ITV for SVoD service BritBox (U.S./Canada), as well as strategic partnerships in Canada with Blue Ant Media for BBC Earth Channel and Corus for BBC Canada. The company also boasts a franchise management business and a robust linear and digital content sales and co-productions operation.

What do you think? Are you glad to hear that Hough is returning to Dancing with the Stars in season 29? Will you be watching the new season?

Yes I am glad Derrick is coming back to DWTS!!!!

I’m not a big fan of Derek, so I’m not excited at all about his return.

I’m not a fan of Derek either, or Tara Banks either. I hope I’m not turned off, I enjoy the dancers. I was not impressed with the first show because of the host and judge.