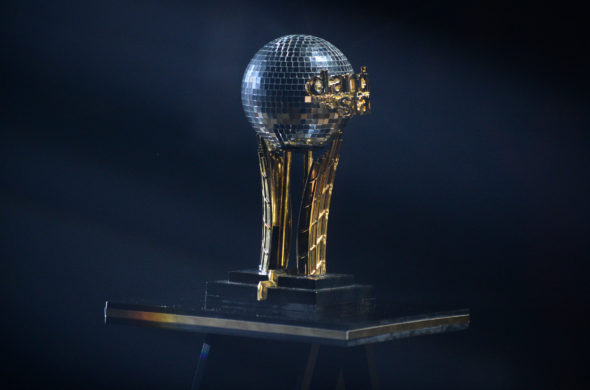 ABC is reopening the ballroom — virtually, anyway. The alphabet network has announced that season 29 of the Dancing with the Stars TV series will debut on Monday, September 14th.

It’s unclear how producers will adjust the venerable competition series usual format given the challenges of the ongoing COVID-19 pandemic.

Here’s some additional information about season 29 from ABC:

ABC’S ‘DANCING WITH THE STARS’ RETURNS TO THE BALLROOM, MONDAY, SEPT. 14

“Dancing with the Stars” is waltzing its way into the ballroom for its premiere on MONDAY, SEPT. 14 (8:00-10:00 p.m. EDT), on ABC. Episodes can be viewed the next day on demand and on Hulu. The unprecedented season welcomes new host Tyra Banks, a fresh take on the competition, and exciting new and returning pros, all while maintaining the heart and soul of the beloved series. Celebrity dancers and additional production details will be announced at a later date.

This season features the return of many beloved pro dancers including Sharna Burgess and Keo Motsepe, as well as the addition of professional ballroom dancers Britt Stewart and Daniella Karagach getting celebrity partners for the first time. Viewers will have to tune in to the season premiere to find out with whom their favorite professional dancers are paired.

“Dancing with the Stars” averaged 9.1 million Total Viewers last season after 35 days of viewing across linear and digital platforms.

“Dancing with the Stars” is the series in which celebrities perform choreographed dance routines that are judged by a panel of renowned ballroom experts. The series is produced by BBC Studios’ Los Angeles production arm. Andrew Llinares and Tyra Banks are executive producers.

About ABC Entertainment
ABC Entertainment airs compelling programming across all day parts, including “Grey’s Anatomy,” the longest-running medical drama in primetime television; riveting dramas “The Good Doctor,” “A Million Little Things” and “Station 19”; trailblazing comedy favorites “American Housewife,” “black-ish,” “The Conners,” “The Goldbergs” and “mixed-ish”; the popular “Summer Fun & Games” programming block, including “Celebrity Family Feud,” “Holey Moley,” “Match Game,” “Press Your Luck” and “To Tell the Truth”; star-making sensation “American Idol”; reality phenomenon “Shark Tank”; “The Bachelor” franchise; long-running hits “Dancing with the Stars” and “America’s Funniest Home Videos”; “General Hospital,” which has aired for more than 55 years on the network; and late-night talk show “Jimmy Kimmel Live!”; as well as the critically acclaimed, Emmy® Award-winning special ”Live in Front of a Studio Audience: Norman Lear’s ‘All in the Family’ and ‘The Jeffersons.’” The network also boasts some of television’s most prestigious awards shows, including “The Oscars®,” “The CMA Awards” and the “American Music Awards.”

What do you think? Do you like the Dancing with the Stars TV series? Will you be tuning in for season 29 of this ABC series?

No I won’t be watching this year. I don’t care for your new host. Tom and Erin made that show.

The show WILL NOT be the same without Tom. Please have him return if possible. Love the show but love him as host the most.

I shall no longer watch this show without Tom and Erin. Simple. Whatever your reasons to use this wanabee host, definitely NOT good enough to fill up the gaps!!

No Tom, not gonna watch. He was the heart & soul of the show and I really do not like or care for Tyra. One less show to be addicted to….hope it fails.

Tyra sucked as host on other reality shows and they thought she should replace Tom? Morons! I’ll still watch, but I am totally fast forwarding all her parts!

If Tom is no longer the host and Tyra is we will not watch. Tom made the show.

NO TOM? NO THANKS!

I’m not sure about Tyra Banks keeping my interest. She seems to get off topics when I would watch her on others shows, but we will see. I love watching the dancing!!

I for one will not be watching since Tyra is going to be on.

I have always loved DWTS. Have watched it from the beginning. To be honest, I have doubts about Tyra Banks. Dont even like her promos for the show. Ratings could very well tank. But we’ll see. I will watch, at least the first night.

I can’t wait to see the return of DWTS’s first episode.