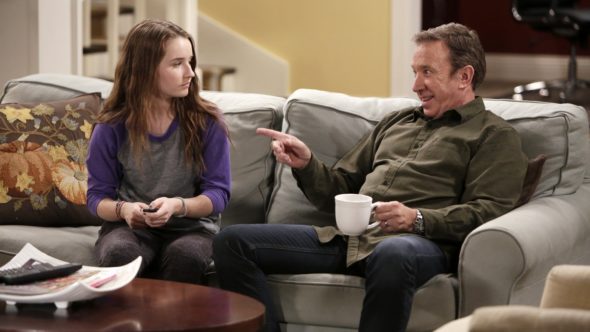 Last Man Standing finished its sixth season in March, but it’s still unclear if the ABC TV series will return for a seventh. What do you think? Should the show be cancelled or renewed? Would you watch another season?

It wouldn’t be surprising if ABC did renew Last Man Standing. According to Deadline, the series is performing well in syndication and ratings have been consistent for the past two seasons. The most recent, season six, averaged a 1.15 rating in the 18-49 demo and 6.407 million viewers, making it ABC’s third most-watched show for the 2016-2017 season.

What do you think? Are you a fan of Last Man Standing? Do you think ABC should renew the show for a seventh season? Would you watch?

Don’t take off my show. you are idiots if you take last man standing off.

We love this show. Please don’t cancel one of the best shows on TV.

Absolutely would continue to watch Last Man (Tin Allen) Standing. Look forward to this show every week. Tim tells it like it is in every episode and it appears some people do not like that. Bravo LMS and hope you find a new home!

We love this show, it’s funny, witty, the cast is terrific, as well as, the writers. As it is, we only watch a handful of shows on the regular channels and this is one of them, please don’t cancel it.

Love the show. He was a lovely man. He had his show home improvement with three boys. And the last man standing was with three girls.. I would still wTching it. I watch it very Friday night.

Best laugh on tv. Finally a show that really sounds like us.

Keep It! Great show, funny and the cast members are great.

This is one of the few shows that even my granddaughter at 7 years old can watch. IF you take that away, there is very few left. There is no nudity, vulgar language, etc. And the ratings have been great. So why take it away other than political.

LOVE this show! A great family show. Relatable and just plain enjoyable! My favorite show. A show that also experienced -5.11% change in the 18-49 demo rating compared to Modern Family at -16.19, and is experienced the least decline of all shows in said 18-49 category . (https://tvseriesfinale.com/tv-show/abc-tv-show-2016-2017-season-ratings/) Way to go ABC, you’ve outdone yourselves this time.

We love this show, it is the best family show out there. So true to life and funny. Please don’t cancel this show.

As a family we never miss an episode. Please please do not cancel. So few family shows left!!!#

Don’t cancel this show! This show really makes me laugh, not many other shows do. Can’t believe you would even think about cancelling it!can’t find season 6 on my tv at all, it’s irratating. Guess if you cancel this show I’ll quit watching abc and start watching cbs or nbc or something else .

Don’t cancel show love it. Trying to find season 6 my dvr is not recording it.